In a Vase on Monday: The drama continues

So, when we last left Blue Eustoma she was laying low and limiting her contacts.  However, this week, she appears more sociable.  Her colorful companions have lightened the mood surrounding her and she looks all the more striking in their midst.  Perhaps she's overcome her heartbreak over Dahlia 'Loverboy'?


Has Blue Eustoma moved on?  It's hard to say.  California Aster is supportive but lacks substance and tends to burn out when the heat is on.  Beach Aster is nice but awfully short.  It may be that she simply needs time to rest.  There are signs that she's packing her bags to take off.  Whether she'll be gone for a few days, several weeks, or the balance of the season isn't yet clear.

Meanwhile, 'Loverboy' is still carousing about, seemingly unprepared to settle down.  Frankly, he was feeling the heat last week himself and his usual stamina was diminished.  He once again sought out new companions, perhaps as a way of avoiding any chatter about his persistent infidelity.


If any readers are concerned about the fate of Gomprena 'Itsy Bitsy', don't be.  She's a lot tougher than she looks.  While there wasn't a long-term relationship in the cards with Dahlia 'Little Robert', she and Phalaenopsis are still together and doing just fine.

Rising above the sordid affairs elsewhere in the garden, the sunflowers all but demanded attention this week.  The only problem they presented had to do with locating a vase capable of holding up their heavy heads. 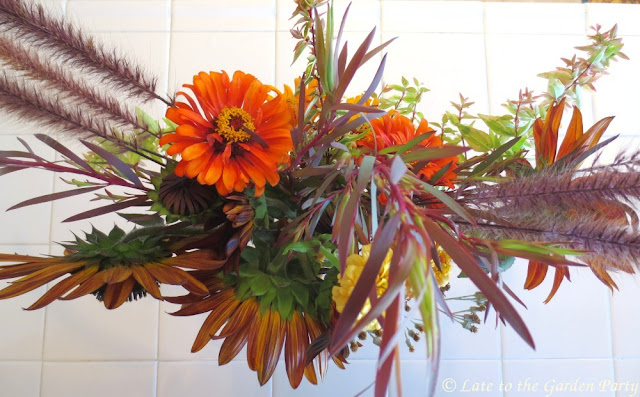 Visit Cathy at Rambling in the Garden for more vase views.