In a Vase on Monday: Breaking News

We're interrupting our regular "In a Vase on Monday" coverage for a special update.  Despite prior media reports suggesting that the split between Blue Eustoma and Dahlia 'Loverboy' was permanent, it appears the parties have ended their estrangement as abruptly as it began.  They were spotted on Sunday afternoon, cozying up together in a vase.   Surrounded by old friends, it seemed they had eyes only for one another.  Is the reconciliation permanent?  Who knows.  These celebrity pairings are notoriously volatile but we wish them well.


In other news, there's another Dahlia in town.  'Punkin Spice' made a long-awaited appearance on stage last week.  We weren't sure he had any friends in town but he had no trouble assembling a posse.  In fact, the crush surrounding him bordered on becoming overwhelming.


Almost lost among this flurry of news, last week also saw the return of one of the coolest customers around, Celadon Green Eustoma, Blue's cousin.  Not seen since last summer, she crept into town for what looks to be a very short stay.  She took a tumble soon after her arrival and is keeping a low profile, hanging out with some equally cool friends who don't eclipse her.


Speaking of eclipses*, I hope everyone in the US enjoys today's solar eclipse.  Los Angeles will experience only a partial eclipse (0.69 magnitude), peaking at 10:21am.  Despite all the hype, we failed to pick up protective eyewear before the shelves were bare so my husband fashioned a pinhole viewer.  We're as ready as we can be but don't expect any photos. 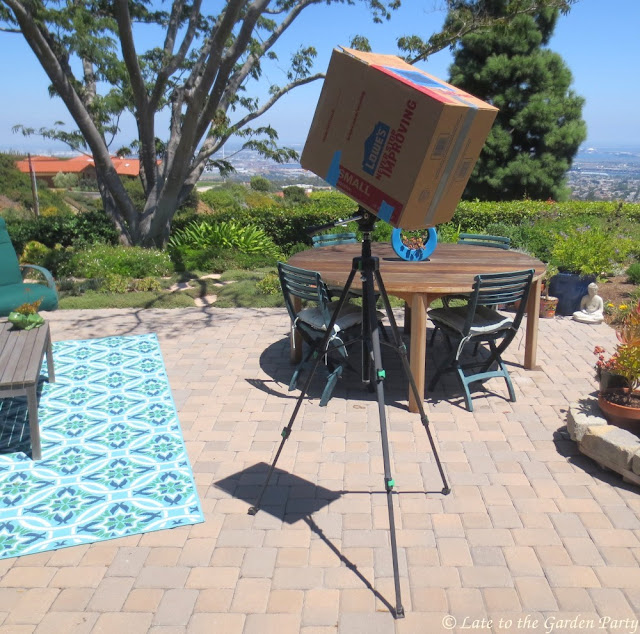 For a view of more vases, visit our "In a Vase on Monday" Host, Cathy at Rambling in the Garden.

*Yes, that transition was a stretch.