In a Vase on Monday: Sour Grapes

In last week's "In a Vase on Monday" post, I featured artichokes as a prop.  After the fact, it occurred to me that I could have tried using them in the vase as I've seen professional flower arrangers do on occasion.  Later, as I was walking by my grapevine, I decided I should try incorporating some of the immature grape clusters into my next arrangement.  I've used the leaves before but not the grapes themselves; however, as we never manage to get more than a handful of semi-ripe grapes from the vine before the critters strip it clean, there's little reason not to use them in an arrangement.  And, the truth be told, I'd let the vine get completely out of control so it can only benefit from a little thinning.

I kept the arrangement very simple.


I put together a second vase but also kept it simple.  While the overall volume of flowers in my garden may be greater now than it's been to this point, there's less variety at the moment.  Yellows and blues dominate.


Visit Cathy at Rambling in the Garden for more vase creations.  I'm grieving with those of you in the UK over the latest senseless act of violence on your side of the pond.  My condolences and best wishes to you all. 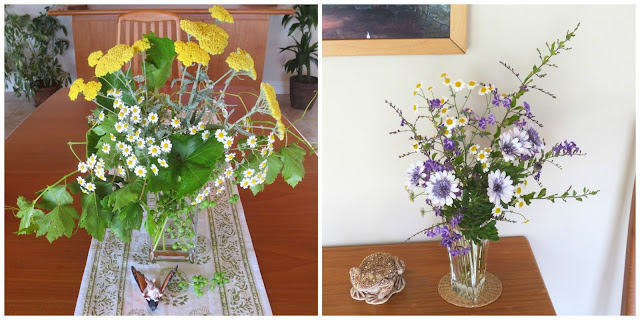