It's raining again this afternoon and there's more rain predicted for late next week.  The long-range forecasts suggest that rain may continue at intervals through April, which, after 5 years of drought, is almost hard to get my head around.  As rain is synonymous with winter here, that suggests a delay in spring's arrival but there's already evidence that spring isn't going to let a little rain get in the way.  Right on schedule, our local harbinger of spring, the ornamental pear trees (Pyrus calleryana) dotting public and private spaces throughout the region, are bursting into bloom, a fact I couldn't miss when I took a peek at my back slope yesterday afternoon.

These are messy trees but I can enjoy those on my neighbor's property without any problem.  However, I did inherit one of my own with the house and garden.  Its mess has been manageable in prior years but, despite a good pruning in early December, its litter habit has been a lot harder to deal with this year.


But the flowers on the ornamental pear aren't the only sign that spring is on the way.  Narcissi have been in bloom for a few weeks and other bulbs are now joining the chorus.


Other plants are also poised to bloom any minute.

In addition, Crassula 'Springtime' is in bloom.  Can there be any better proof that spring is in the air? 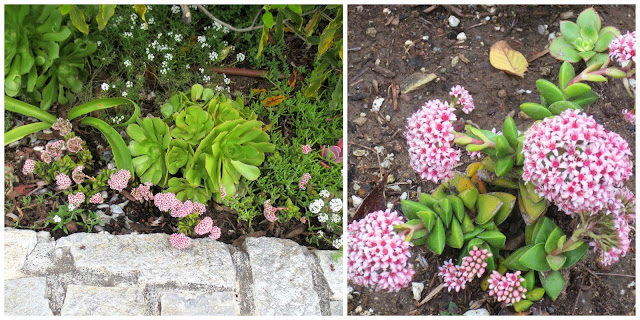 Well, how about the first sweet pea blooms?