In a Vase on Monday: Three for Cathy

Cathy of Rambling in the Garden is celebrating the third anniversary of "In a Vase on Monday," a popular meme that encourages gardeners to put together arrangements from materials they have on hand.  I joined in for the first time at the end of March 2014.  I've been impressed by Cathy's commitment to the weekly exercise and the congeniality she's inspired among participants.  Cathy suggested a theme, "three," for this week's post so, unable to think of a more creative angle, I have 3 vases this week, each featuring my favorite flower, Eustoma grandiflorum (aka Lisianthus).

Vase #1 is the most ambitious:


Vase #3 features the last of the purplish blue Eustoma:


Last week's succulent-topped pumpkin has been moved aside for the time being to give me sufficient space to scatter this week's vases throughout the house. 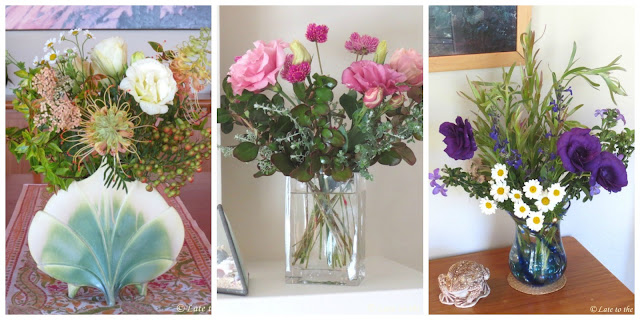 To see how Cathy is celebrating her third "IaVoM" anniversary, visit her at Rambling in the Garden.