Last Sunday afternoon, I made a trip to Rainforest Flora, a nursery specializing in tropical plants, more specifically bromeliads.  The nursery was hosting a bromeliad show and sale, which I'd learned about in a recent post by Denise of A Growing Obsession.  I arrived mid-afternoon on the second day of the 2-day event.

I took quite a few photos, which I'll cover in another post; however, I thought I'd offer one as my contribution to the Wednesday Vignette meme hosted by Anna at Flutter & Hum.  With apologies to Jerry Lee Lewis, my first thought upon seeing the following construction was "goodness, gracious, great balls of fire!" 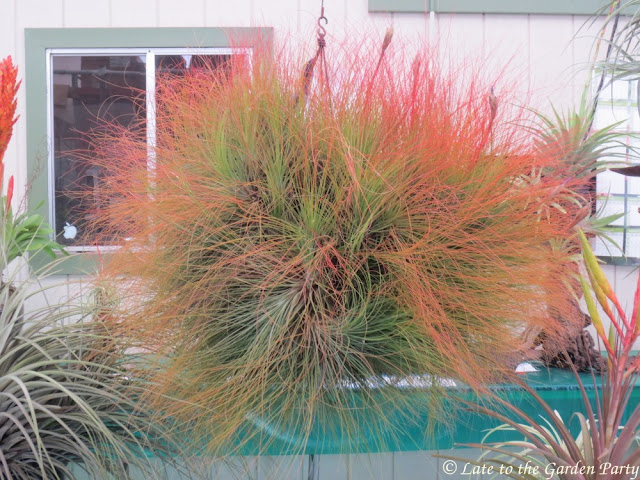 The ball in question was on display as part of the show and sale put on by South Bay Bromeliad Associates.  It was made of dozens of Tillandsias, commonly known as air plants because many don't need to be planted in soil to survive.  Unfortunately I didn't get an ID for this particular species of Tillandsia.  Rainforest Flora also had Tillandsias mounted en masse on hanging balls but none of these had leaves flushed with color.  Nonetheless, they were impressive.

Visit Anna at Flutter & Hum to find what caught the fancy of other gardeners this week.