It's the last Friday of the month, when Loree of danger garden calls for gardeners to celebrate the plants that earned their favor this month.  August is a month when the plants here hunker down and wait for better days so finding stand-outs isn't easy.  Even though our summer temperatures have been milder than they were in late June and extra irrigation has generally perked things up, the plants I'm drawn to at the moment are mostly those I've already featured within the last few months.  But a few plants are deserving of notice.

Ozothamnus diosmifolius, planted in November 2015, is finally living up to my expectations.

Leucadendron salignum 'Chief', planted in January 2013, fulfilled its promise long ago while its companion, Leucadendron 'Ebony', planted some 8 months later, has been slower to develop.  The two are finally beginning to play off one another as I'd envisioned.

Lantana camara 'Irene', planted from 6-packs in May 2015, is at last providing the pops of color I'd imagined around the base of the Pennisetum in the back garden.  Although it's a drought tolerant plant, it needed the boost it got from additional irrigation to produce more than a flower here and there.

The succulents can be depended upon to look good year round but two earned special recognition this month.


Unfortunately, I also had a major loss this month.  My Leucadendron galpinii, a relatively recent purchase, dropped dead in record time.

I was excited to find this plant in a one-gallon container for the first time and, perhaps foolishly, decided to go ahead and plant it in the backyard border in July rather than waiting for more hospitable weather.  Even more foolishly, I planted it in the same location as the Adenanthos sericeus I'd lost earlier.  Tracing the history of plants in this area, I realized these aren't the first losses in the same area.  I previously lost both a Prostanthera ovalifolia and a Philotheca myporoides in the same general vicinity.  Based on my (somewhat patchy) records, all seem to have expired relatively quickly.  I'm going to test the soil to see if that provides clues to what's going on.

So as not to end on that sour note, here's a photo of the lovely Pennisetum 'Fireworks' in my back garden.  I think they look even better than they did in last month's favorites post.  Pop over to Loree's site for more August favorites. 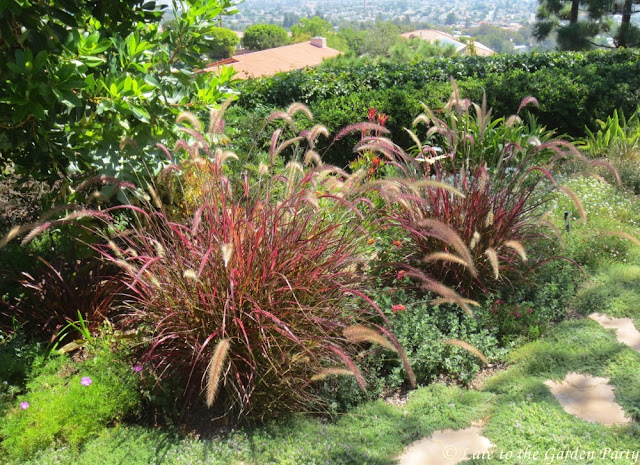