We got rain!  Despite having to drive through rain-flooded streets yesterday, I enjoyed the first rainstorm to reach us courtesy of the weather phenomenon known as El Niño.  According to the little weather station attached to our roof, we got just 0.61 inches of rain here but other areas got more and the mountains got snow.  There's been some flooding but no monumental problems as yet, at least that I've heard about.  Much of the rainwater I'd drawn from my collection tanks for use in irrigating my garden over the past few weeks was replenished.  And more rain is expected today!  It's enough to make me giddy.

I've seen a few photos of rain-splashed windows posted by other garden bloggers.  I know that those who've been deluged by rain are very tired of it but, to me, those pictures are beautiful.  Now I have one of my own.

People often comment about our view when they see photos of the backyard garden.  I normally pay relatively little attention to it but I admit it's great backdrop to watch sunrises, sunsets, fireworks and, sometimes, weather changes.  Late yesterday afternoon there was a break in the rain and I watched the clouds move swiftly across the sky, changing the view of the Los Angeles harbor as they moved.


As sunset grew near, the sun broke through the clouds and bathed the back garden in glowing yellow light.

The sunset was remarkable.  I took a couple dozen photos but will share just a few. 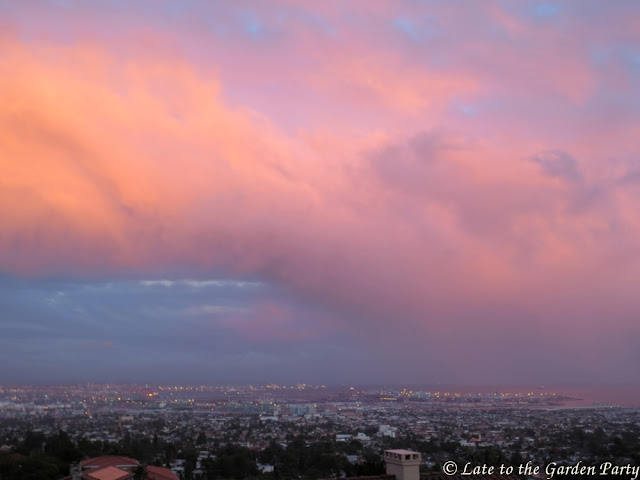 This morning began with sun but that's disappeared and we've had some light rain already.  The slow start is appreciated as it'll give the parched soil an opportunity to absorb the moisture before we get anything heavier (I hope!).