As those of you who regularly read my blog may remember, we had the last of our sod stripped away in late September.  That was followed by months of digging to remove grassroots and sod netting in the affected areas before we added topsoil and amendments.  I reported progress with the backyard area in late November and mid-December.  I'm finally ready to provide a status report on the front yard area.

As a reminder, here's what the area looked like at earlier stages in the process:

Here are a the most current photos of the same area:


We completed our digging at the end of December.  We then added imported topsoil and amendments to improve soil drainage.  A railroad tie and gravel path was laid to connect the existing walkway to the street and a flagstone path was added to make it easier to work in the surrounding beds without stomping on plants.  Planting has begun but is by no means complete.

The area closest to my neighbor to the north, which is sunny for most of the day, has been planted with lots of succulents.


The area on the other side of the gravel pathway, screened to a significant extent by the existing Xylosma congestum hedge, is much shadier.  Planting has only just begun in this area.  This far, I've relied mostly on shade-tolerant plants and divisions of plants from the side garden.

This is a working area of the garden rather than one for resting and relaxing.  The railroad tie and gravel path is intended for use in moving our trash cans to and from the street. 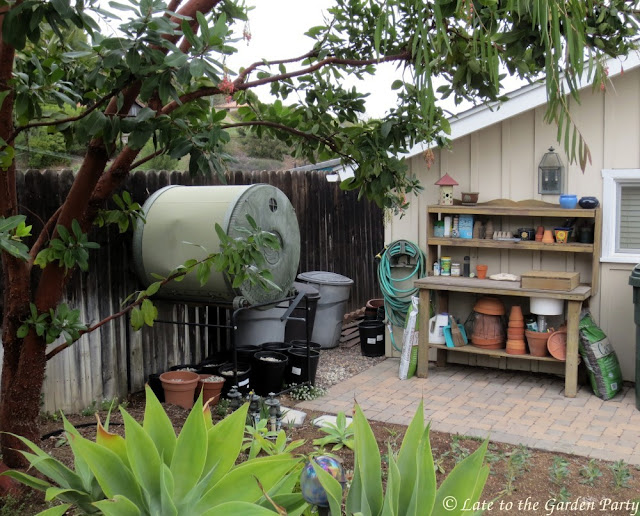 Garden accents are few but there are a couple.

The biggest source of frustration with the area thus far is the arrival of the raccoons.  They've ignored this area for the 5 years we've had the house.  Did they dig when the area was covered by lawn?  No!  Did they dig once the sod was removed?  No!  Did they dig at anytime during the time we ourselves were actively digging in the area?  No!  But, 2 days after I planted the area, they've laid their claim.