In a Vase on Monday: Red!

I avoided using red flowers and foliage in my former garden.  That garden was tiny and red seemed to overwhelm it.  Yet red, in measured doses, has a prominent role in my current garden, especially when it comes to foliage color.  I still have relatively few red-flowering plants but there are some.  Perhaps the flashiest of these is Calliandra haematocephala, popularly known here as pink powder puff.  I inherited 4 of these plants with the house, all grown as hedges along pathways and against the house.  They're generally sheared to keep them within bounds so they don't bloom as heavily as I'd like but the one grown alongside the garage blooms reliably at this time of year.  I've previously used it in vases with Grevillea lavandulacea 'Penola' but the blooms on those shrubs are tardy this year so I had to look further afield for companions.  Foliage plants came to the rescue. 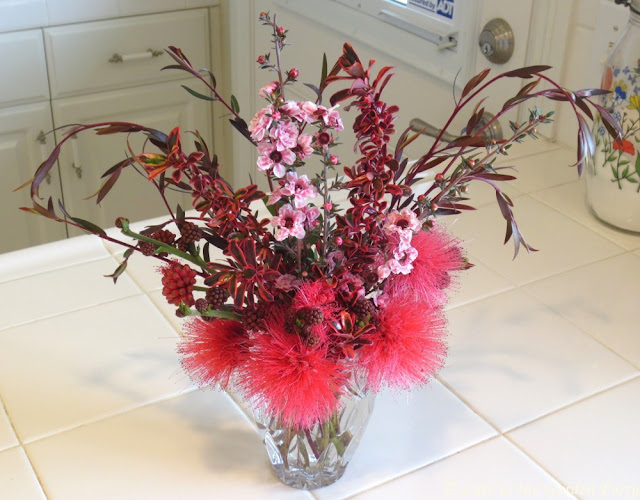 Leptospermum 'Copper Glow' was a natural choice for foliage.  It's copper color has reddened dramatically since the temperatures dropped and I admire the plant daily as I go in and out the front door.

There's a second L. 'Copper Glow' on the other side of the pathway but for reasons that elude me it isn't nearly as red.  However, the Coprosma repens 'Fire Burst' planted below it provided my second foliage choice.  I added a few stems of Leptospermum scoparium 'Pink Pearl' whose flowers have dark burgundy centers to lighten up the arrangement a bit.  Here's a closer look at the individual elements:


The vase replaced last week's arrangement in the front entry.  Other than the Nandina foliage, last week's vase held up well.  I don't recall that the Calliandra blooms last very long but time will tell. 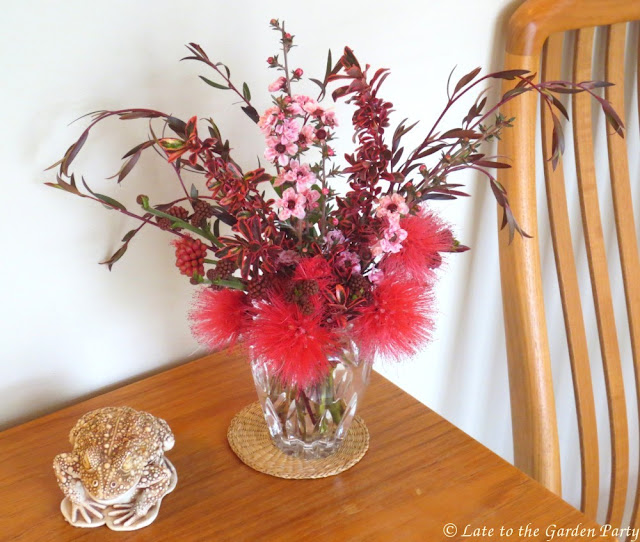 Visit Cathy at Rambling in the Garden, the host of the popular "In a Vase on Monday" meme, to discover what other gardeners have found to include in their vases this week.