My favorite plant this week is a Magnolia grandiflora we inherited with the house.  It sits in the middle of what used to be our front lawn.  When we removed the lawn and excavated the area around the tree last year one of the things that worried me most was whether we might harm the tree as its root system was extensive and ran close to the surface of the soil.  To the degree possible, we limited our cuts to the tree's roots to the area outside its drip line but the impact was still significant, or at least it seemed so to me.  Rainfall has been low for 4 years now and we've reduced irrigation in response to calls for water conservation, further stressing the tree.  In addition, in response to a neighbor's complaint about obstruction of her view by our trees, I thinned the tree's canopy this year.  However, despite all these stressors, the tree seems to be doing fine.

My best guess is that our tree is Magnolia grandiflora 'Majestic Beauty', which is known for its pyramidal shape and its exceptionally large flowers.  We estimate that the tree is 35-40 feet tall, which is in line with the projection for a mature tree of this cultivar.

We're generally unable to view the flowers except from a distance as most grow well above our heads.  Dropped petals and humming bees are the usual clues to flowers above but, even craning my neck, I get no more than a partial glimpse of the flowers.

So, this week, I was delighted to see that a bud had formed on a relatively low-growing branch.  I was able to watch the bud swell and open.  Better yet, I got a chance to stick my nose up to the open bloom and smell its perfume.

The blooms are a bright white, which fade to a buff color before the petals drop to the ground. 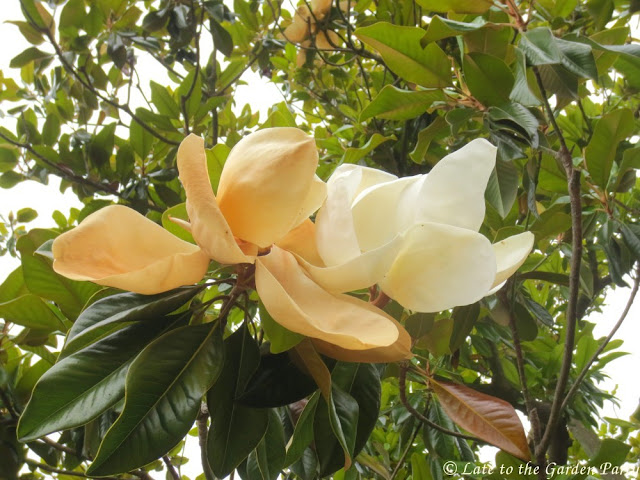 The evergreen tree has large, stiff leaves with glossy green tops and brown undersides.  The leaves drop in profusion this time of year but they're easily cleaned up.  Birds and squirrels will eat the red seeds contained in the tree's cones.  But this year I found a secondary use for the cones when the critters were done with them.

I distributed the cones in the barest sections of my garden beds.  It may look weird but it's not intended to serve a decorative purpose.  This is my raccoon defense system. 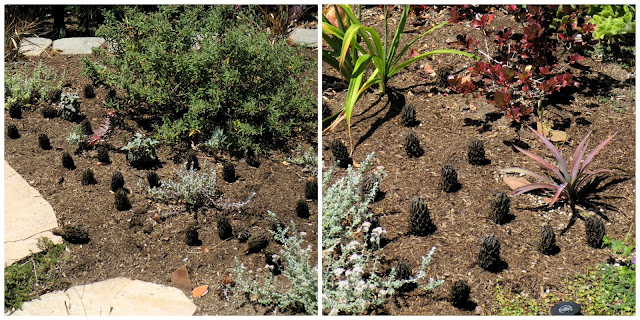 Perhaps, I'm deluding myself but I swear this has worked.  I haven't had any major damage to my garden beds since I installed these cones in early spring.  And it's not as if the raccoons have stopped visiting.  As mentioned in a post earlier this week, I collected rain in garden trugs.  As the trugs were uncovered and I didn't want mosquitoes to proliferate, I used the water as soon as possible in the garden.  Afterwards, in the dirt film at the bottom of each emptied trug, I found the distinctive claw prints of my furry visitors. 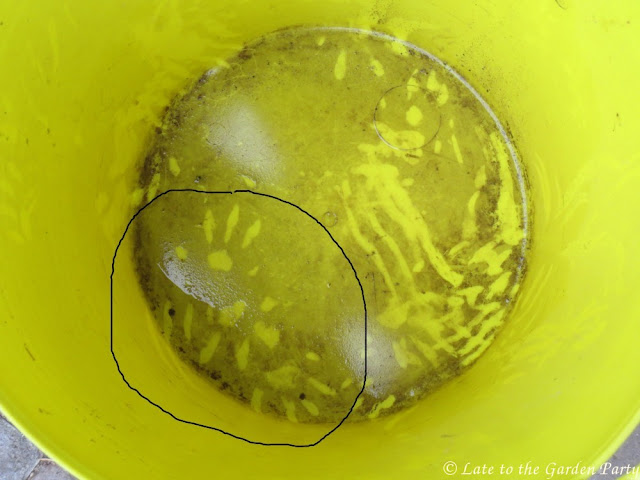 You have to admit my Magnolia has a multitude of uses!  It provides shade, which is especially valuable during our hot summers; it feeds the birds and the bees; and it provides tools to thwart my garden's #1 pest - all while adding beauty to my garden.  What more can you ask of a plant? 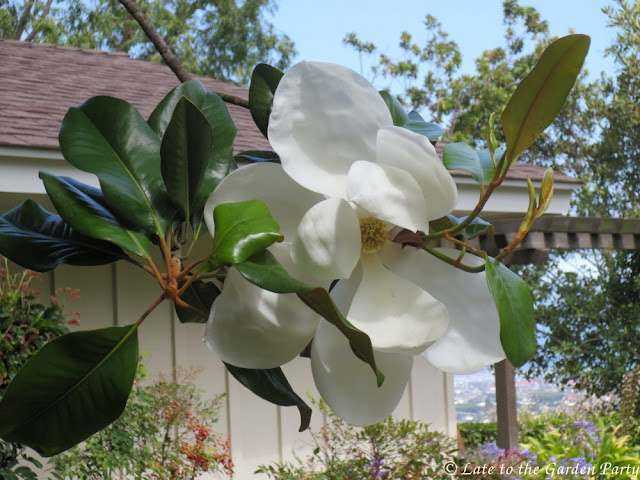 This post is a contribution to the favorite plants meme hosted by Loree of danger garden.  You can find Loree's monthly favorite plants wrap-up on her blog on the last Friday of each month.