Rain was predicted for Friday through Monday this weekend but it didn't show up here until last night and it has been light thus far.  In anticipation of the rain, I took my wide shot photos yesterday, when the skies just held the portent of rain.

The front garden, irrigated by sprinklers once a week and hand-watered as needed during dry spells, continues to fill in nicely. 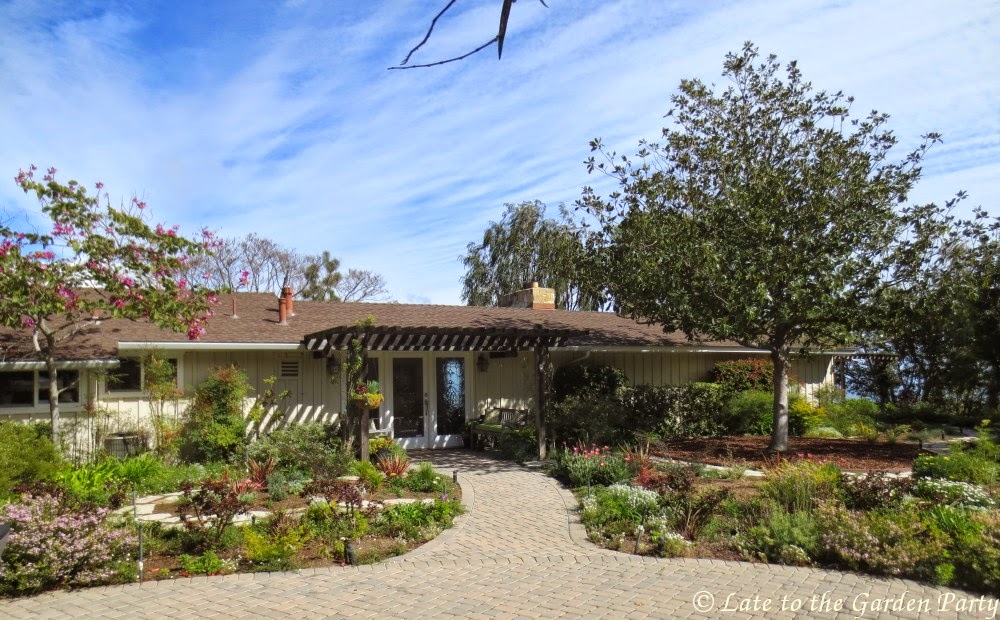 Although raccoons still rummage through the south side yard one or two times a week, they seem to be doing less damage.  I've used the prickly seed cones that fall from the Magnolia tree and thorny stems from my pruned rose bushes to create rings around the newer and more fragile plants, which, amazingly, seems to put them off a bit even if it hasn't sent them packing.


The backyard beds still have holes here and there that need to be filled but I'm holding off any work there until the tree trimming scheduled for next Saturday is completed.


The backyard borders north of the main patio, both created last year, are also filling in well.

Nothing much has been done with the dry garden in the last month.

My husband helped me weed the back slope last weekend.  I did a little planting along the lower slope last month, adding 3 small Pelargoniums and two Agave attenuata pups taken from elsewhere in the garden.  I continue to hand-water the 3 Pittosporum tenuifolium I planted to create a screen between us and our neighbors but I expect it'll be a good year before we have any kind of real barrier there.  Meanwhile, I think the existing lemon, fig and peach trees are benefiting from the increased sunlight.


I planted more sugar snap pea seeds to replace the seedlings previously nibbled by critters of some kind but the second round of seedlings disappeared as soon as they broke through the soil as well.  However, one of the sweet pea seedlings has already produced a bloom.  I'm seriously considering skipping vegetables altogether and using the raised beds to grow flowers for cutting instead.

I haven't touched the street-side succulent bed or the adjoining area I call the "glen" in the past month so little has changed there.


That's it for this month's wide shots post.  My continuing thanks go to Heather of Xericstyle for inaugurating this monthly exercise.