I recently discovered the Seasonal Bouquet Project courtesy of a post by Denise of A Growing Obsession.  The project involves weekly posts of bouquets created by 2 farmer/designers on opposite coasts using locally available materials.  They're very inventive constructions, using more than conventional flowers and foliage materials.  They've prompted me to think more creatively about what I use in a bouquet; however, this is not to say that my creation comes anywhere close to the inventiveness of those shown on their site.

I haven't even tried to put together a bouquet for a few weeks.  Our unusually cool summer turned wicked and it has become increasingly hot and humid.  I noticed that the few roses I have wither almost upon opening.  But pumped up by new floral images, I cut one rose in bud before it had a chance to wither and went looking for other materials to show it off.  Here's what I ended up with: 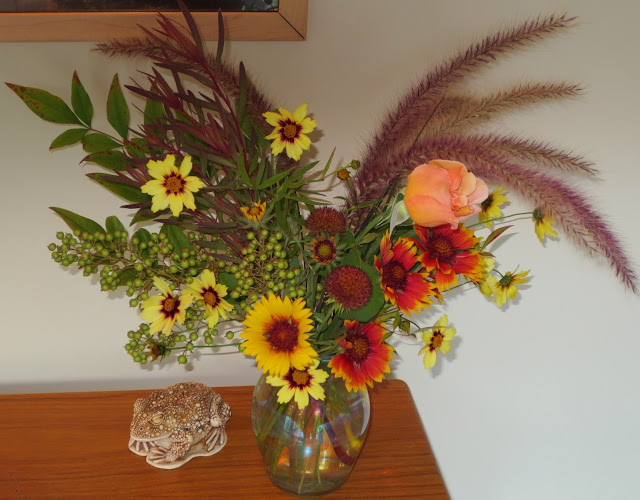 I used some of the same materials I've used in other bouquets but the mix is different and, this time, more dependent on foliage materials.  Here's what I included:

I've previously used Nandina flowers and, while I liked how they look in an arrangement, they shed continuously, dropping rice-like petals.  The Nandina berries hold up much better.


I probably won't post many bouquets as the summer heat wears on but, with those I do, I'm going to make more of an effort.  Now, if I can just keep the cats away from those tempting Pennisetum stems...
Posted by Kris Peterson at 9:51 AM