In a Vase on Monday: Something from nothing

With the plants in my cutting garden rapidly succumbing to the combination of heat and mildew, I didn't immediately see any good prospects to fill a vase.  I fixated on a red and white dahlia bloom in one of the half barrels in my front garden and jumped off from there.  For a time, I thought I'd be combining that single flower with a variety of foliage plants until I noticed that the variegated Australian fuchsia was beginning its annual bloom cycle.

I'd no idea what, if anything, I had available for a second arrangement until I noticed that the Chihuahuan sage (Leucophyllum laevigatum) in my back garden had suddenly produced a second flush of bloom.  The sage bloomed early in September only to have the flowers quickly wither away when our prior heatwave struck.  I hadn't expected another round of bloom so soon.

There were a few yellow dahlias in bloom that I assumed wouldn't make it through the current heatwave, which is expected to run through Thursday, so I cut them for the kitchen island.

With my cutting garden torn up awaiting the (still unscheduled) arrival of plumbers to replace 100+ feet of water pipe and everything in the raised planters sliding into decline, I'm tempted to pull everything up just to restore a sense of control over the space.  However, even with their mildewed foliage, many dahlias have buds and I'm hoping to see more blooms before I throw in the towel on the summer season so, for now, I'm trying to ignore the mess.

Visit Cathy at Rambling in the Garden to find other IAVOM creations. 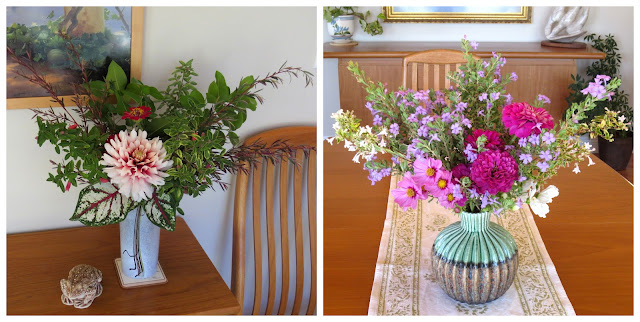