In a Vase on Monday: From exuberant to dainty

After a full week of warmer temperatures, the three bulbs of Hippeastrum 'Luna' I planted in a single pot exploded into bloom.  In addition to the stem I cut for a previous IAVOM post two weeks ago and the two I cut this week, there are still seven flower stalks, almost all of which are in full bloom.  The longer stems allowed me to to go big this week, using a heavy lead crystal vase I received as a birthday gift a few years ago.

Spring flowers are already making their first tentative appearances here so I cut a hodge-podge of pink blooms for a second, more demure arrangement.

We're looking forward to an end to the strong Santa Ana winds that plagued parts of California last week but there's no rain in sight at the moment.  Long-range projections currently suggest that our best chances for measurable rain won't happen until after mid-February.  Can you hear me sigh? 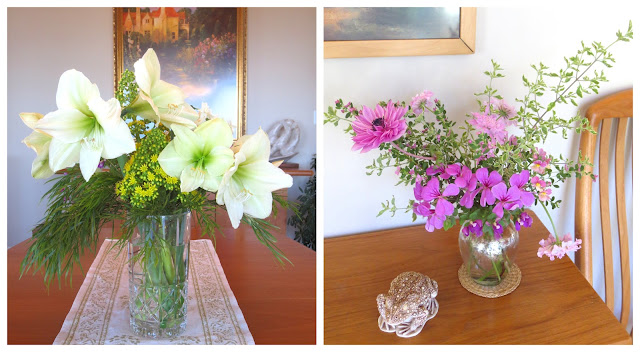