In a Vase on Monday: Variations on a theme

This post marks what is probably the final farewell to the dahlias in my garden for this year.  I've already pulled some and I've cut back others in preparation for storing the tubers for use next year.  The dahlias I used as focal points last week have been trotted out again this week as they had presentable flowers.  I changed up the accent flowers but that's about it.

Dahlia 'Gitt's Crazy' still has some buds and, if they open later this week, I may cut them to give away but I expect I'll dig up the tuber before the week is out one way or another.  It's time to move on and embrace the new season.

Dahlia 'Enchantress' produced her last blooms this week as well.  I originally thought I'd toss them into the vase with 'Iceberg' but I wasn't excited about the combination, which means they went into the small vase of leftovers on the kitchen island.

I've planted bulbs and sown sweet pea seeds in two of the three raised planters in my cutting garden and have yet to clear the third raised bed or the barrels for replanting.  At the moment, the only things left suitable for cutting there are zinnias in the 'Profusion' series, which for some odd reason haven't developed the mildew that led me to pull the larger zinnias weeks ago.  Floral material may be in short supply for awhile.

For more IAVOM creations, visit Cathy at Rambling in the Garden.  The following observance of IAVOM on November 8th will mark the eighth anniversary of her popular meme.  Cathy plans to mark the event with a challenge so check her site for details if you're interested in participating. 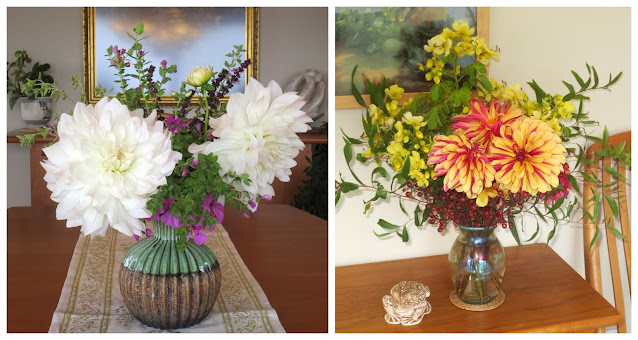