In a Vase on Monday: Is it already summer?

Did you know that the National Oceanic and Atmospheric Administration (NOAA), the US government agency charged with following climate issues, has formulated new definitions of "normal" temperatures?   It makes sense to me given the frequency with which weather forecasters project temperatures significantly above "normal."  Yesterday afternoon, the temperature here peaked just above 87F (30.6C) and today's high temperature is expected to be comparable.  Santa Ana wind conditions are in effect, which means our humidity is also very low, sparking wildfire concerns.  Many spring blooms are beating a hasty retreat and, concerned that others may follow on their heels, I cut a lot of them to bring inside.


I'd hoped to use the fluffy lavender blooms of Ageratum corymbosum in my second arrangement but they're already fading so I pivoted and instead cut several Ixia blooms that appeared just days ago.  They inspired a pink, white and yellow color scheme.  I wasn't entirely happy with it but, as it was already getting very warm, I decided against deliberating any further.

I'd cut a couple stems of yellow snapdragons to include in the second vase but the nearly fluorescent yellow of those flowers was jarring so I popped them into a tiny vase for my home office. 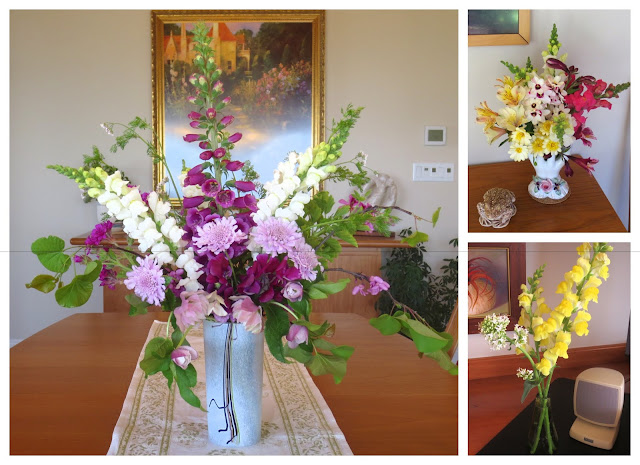