In a Vase on Monday: Going crazy

The title of this post has less to do with my mental state than the fact that, at long last, Dahlia 'Gitts Crazy' has bloomed, earning it the starring role in my first arrangement.  The dahlia was planted during the latter part of April, late based on my usual practice, but not as late as others that bloomed much earlier.  I'd nearly given up on it when it finally budded out.


My usual fall bloomers have recently shown up too, chief among them the bush violet (Barleria obtusa).  Since it made its first appearance with a few stray blooms last week, it's moved into high gear.  Each stem bears literally dozens of buds.  No single bloom lasts long but even those still in bud open gradually after the stem is cut, extending the show.


For more arrangements created by contributors from materials on hand in their gardens, visit Cathy at Rambling in the Garden. 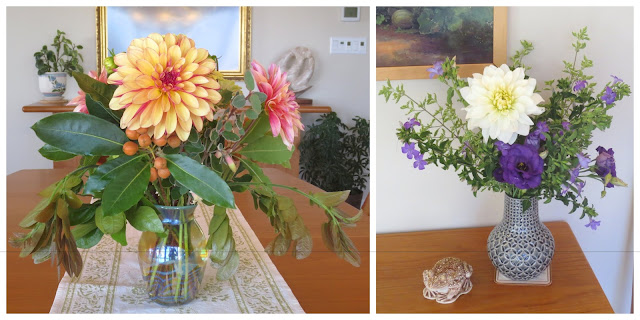