In a Vase on Monday: Heatwave holdouts

While the heatwave that started last week hasn't been as bad as the prior one, it's held on longer than originally forecast and it's not over yet.  Temperatures have come down from our 102F (38.9C) peak but we've been stuck at 92F (33C) here for days now.  Our air quality has worsened again too so nothing but the most minimal gardening work is getting done but hopefully the weather and air will be better by the end of this week.  In the meantime, I've slogged through all the propositions on California's November ballot (12, not including an LA County measure) so I'm prepared to vote as soon as my ballot arrives.  I haven't tackled my ironing backlog yet but that's on the docket next...

The dahlias in my cutting garden went into hyperdrive last week.  I don't think it was a response to the heat but the heat had an impact nonetheless.  Lots of the top-heavy blooms toppled over and even those that didn't bloomed out quickly.  There are still a lot of flowers out there but last week was crazy and I only had the energy for two arrangements yesterday.

Dahlia 'Rip City' is blooming like there's no tomorrow so it won more time in the limelight this week.

For more IAVOM creations, Cathy at Rambling in the Garden is the one to see. 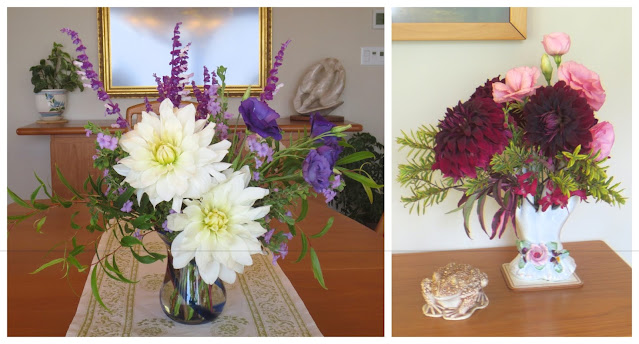