Wednesday Vignette: A bird's eye view of the garden

Last Wednesday we had an unexpected visitor.  We'd heard him, or one of his kin, kicking up a fuss, several days before but we didn't see him and, when he was silent for several days, we figured he'd moved on or run afoul of one of the self-appointed vigilantes that patrol our area every night.  I thought I heard his tell-tale squawk Wednesday morning but dismissed it as a figment of my imagination.  But, as I headed out the door to collect my car for a pet supply run, there he was, standing in front of the open garage door. 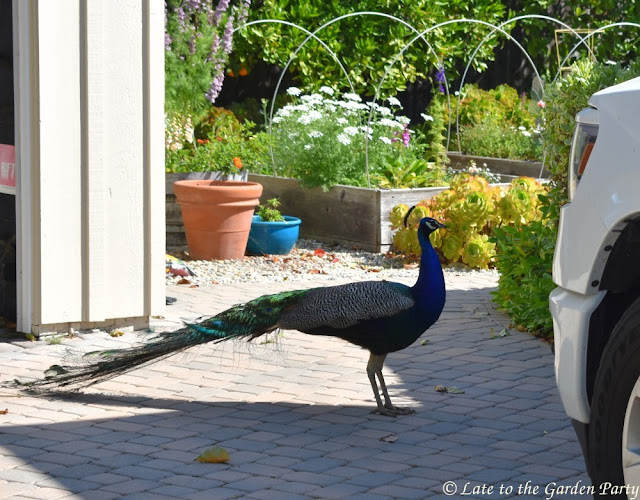 Peacocks can be found all over the peninsula we live on but they're seldom seen in our immediate area due to the aforementioned vigilantes, aka coyotes.  Peacocks were brought here around 100 years ago, reportedly as a gift to a wealthy landowner.  They thrived, much to the chagrin of some present-day homeowners.  They have their advocates and their detractors.  I periodically come across one on our main road but I've only seen them in our neighborhood twice in nearly 10 years.  Both those birds were juvenile males, presumably tossed out of their family compounds as they matured.  They were generally gone within a day.  This is the first time I've ever seen a mature male here.  It's peacock mating season and apparently he was looking a little further afield to find his peahen.  I grabbed my camera and followed him through my garden, observing proper social distancing of course.


When he moved onto my neighbor's property, I gave up my paparazzi assignment and got back to my pet supply run.  That took about an hour.  When I returned home, I asked my husband if the peacock had returned while I was out.  He said he expected it was long gone, just as I looked out our kitchen window and spotted him on the back patio looking in our direction.  Scooping up my camera, I followed him once more.

He hugged the wall of the neighbor's house, moving behind the flowering Centranthus ruber, headed in the direction of the canyon.  If he was lucky, he found himself a mate.  If he was unlucky, he found himself facing a coyote.  In any case, we haven't heard plaintive cries of any sort in the past week.  Our only surprise this week was rain, which is unusual in May to say the least and, for me, even more exciting than a visit by a peacock.