In a Vase on Monday: Going tiny

Today is the anniversary of the popular meme, In a Vase on Monday, launched by Cathy of Rambling in the Garden six years ago.  I joined up at the end of March 2014 and have participated regularly ever since.  To recognize IAVOM's anniversary, Cathy challenged contributors to go small this week, creating diminutive arrangements.  I didn't quite make the six-inch height and width limit she suggested but I came close.


As usual, I cut more than I could stuff into the three-inch green vase so the overflow - and a couple of extras - went into a second vase.


Happy anniversary Cathy!  Thank you for leading this meme without ever dropping the ball.  You've made Monday special for many of us!  Visit Cathy to find more IAVOM posts. 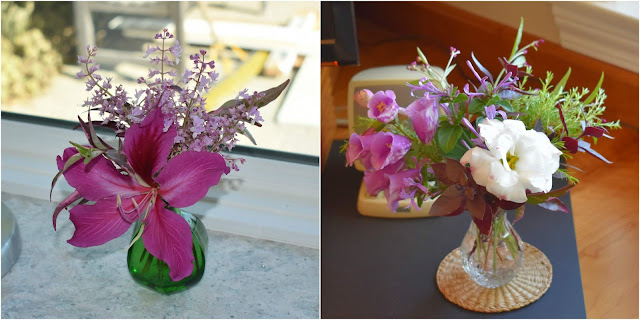