Last year, I noticed that the local botanic garden had empty plastic flats strewn over planting beds in some areas.  At first, I thought someone had just failed to pick up after him/herself.  But then I realized that the flats were intentionally laid over newly planted beds, presumably to protect them from meddlesome critters.  I decided to copy that approach and began collecting my own plastic flats.  I have at least a dozen, which last fall I'd decided was more than enough.  It wasn't.


Oh well.  I won't be turning down any flats offered by local garden center to transport new purchases anymore.  I guess my plan to clean up the storage area behind the garage will also have to be revisited.

In the short term, heavy rain and saturated soil may keep the raccoons at bay for one or two nights.  Another "atmospheric river"  blew in last night.  We saw flashes of lightning in the distance.  Apparently Santa Barbara and Los Angeles recorded almost 1500 lightning strikes within five minutes.  A plane exiting LAX was struck by lightning and forced to turn back.  While evacuations have been ordered again in Santa Barbara County due to a fear of mudslides, there are no serious issues in our immediate area that I can see.


On a pleasant note, the Xylosma congestum shrubs we planted to extend our hedge along the street are coming along nicely.  The new spring foliage makes me think I don't need to envy the fall foliage color of gardeners in colder climates.  My spring foliage is pretty too. 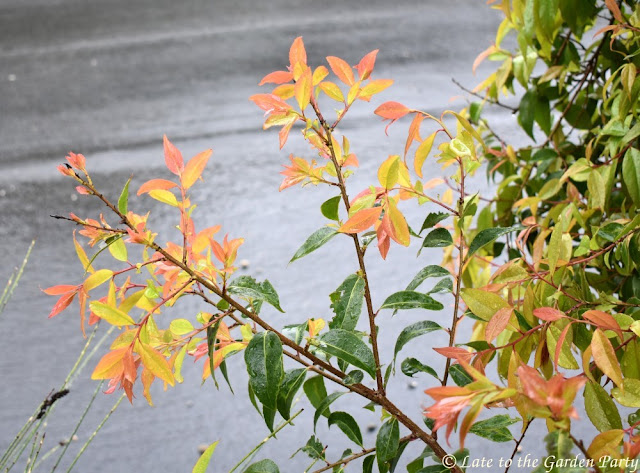