Tell the Truth Tuesday (Late Edition): The Sad State of my Bromeliad Bed

In October 2017, I planted a shady area along our property's northwest boundary line with bromeliads, succulents and other foliage plants to create what I called a pocket garden.  It did alright for awhile but eventually my nemeses, the raccoons, discovered it.  They've dug it up many times since but the combination of heavy rain and renewed raccoon activity this past month has created a downright awful mess. 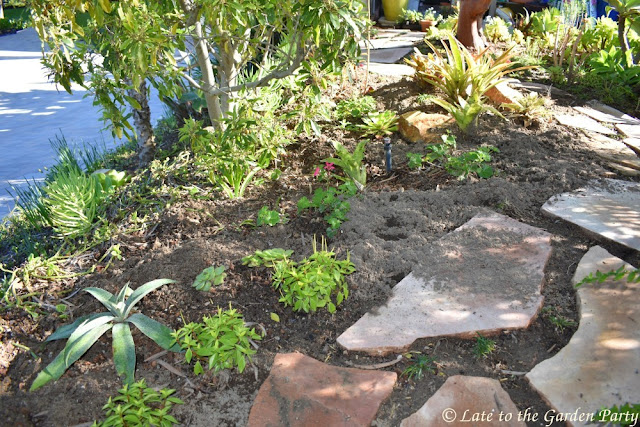 After nearly 48 hours without rain, the area was at least dry enough to pat the soil back in place around the plants that hadn't been ripped apart by the raccoons.

The dwarf mondo grass I planted hasn't created the impenetrable ground cover I'd envisioned and the wood mulch I used to cover the bare soil didn't deter the raccoons from digging either.  In fact, after multiple rounds of digging, the mulch has been pretty thoroughly mixed into the soil, which, trying to put a positive spin on things, I suppose the bromeliads might actually appreciate.  Most of the bromeliads planted among rocks, even those planted as pups, are fine but the same can't be said for many of the succulents and smaller foliage plants.

Before I replant, I think I'm going to bring in more rocks to make future raccoon incursions more difficult.  I may also trade up the small plant specimens I initially planted for larger plants that might he harder to dislodge.

While I'm at it, I'll replant the driftwood piece I covered in succulents over a year ago, as well as a pot I had nearby.


I still dream that the area may live up to my aspirations for it - someday.

If you have an ugly area you'd like to come clean about, join Alison of Bonney Lassie for Tell the Truth Tuesday.