The garden through a cat's eyes

I've been feeling guilty about not giving my cat, Pipig, any time to roam outside.  Concern about her ambushing an unsuspecting bird is part of that, although she's never shown herself to be a huntress, but the bigger concern is the risk of a run-in with a coyote as these animals have become far more aggressive of late.  They used to confine their hunting to the night hours but now they're often seen during the day.  Just a couple of months ago, our next door neighbor's Pomeranian was carried off from a fenced backyard.  I was also told that a local woman and her Mastiff were recently surrounded by a pack of 3 coyotes while walking in a nearby park during daylight hours.  Under the circumstances, I keep Pipig close.  In addition to full run of the house, she has a porch of her own with a climbing tree and catwalks but she still runs for the door every time I enter to clean her box.  This week I gave her a treat and accompanied her on a supervised stroll through the garden.


I don't know why she was so fascinated by the view through the metal screen.  She didn't have any interest in the plants that drew my eye.


For a moment, it looked as though the Ageratum corymbosum had caught her interest but my guess is that she may have sighted a lizard.


She moved on and checked out the Aeonium arboreum.


After allowing her to munch on ornamental grass for a few minutes, I moved her back to the main walkway to keep her a safe distance from the bird feeder.  She wasn't pleased.

I let her stroll a bit further, nipping at her heels but then noise from across the canyon made her nervous.  She doesn't like loud noises.


So I cut Pipig's stroll short, set her back in her porch, and closed the door.  Back on her cat tree perch, loud noise forgotten, she gave me the stink-eye. 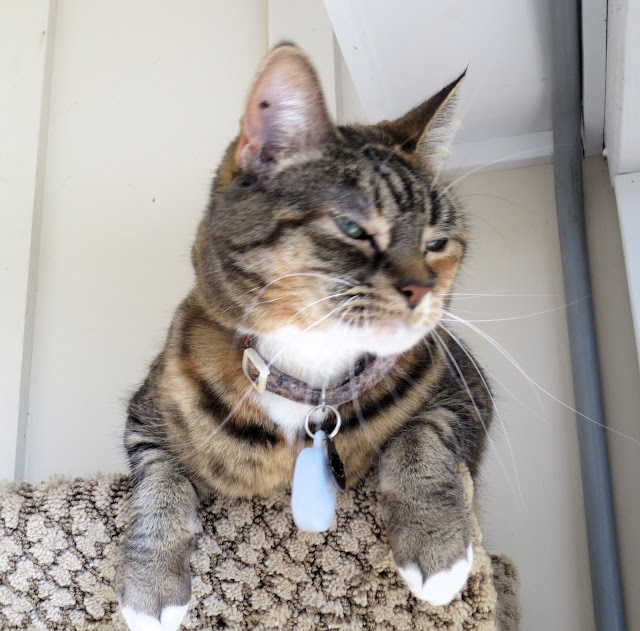 Posted by Kris Peterson at 5:02 PM