Last week, after walking my own neighborhood, I decided to hike up the main road to take a look at the harbor from a higher vantage point.  I frequently see people, some obviously tourists, stopping at a particular spot along that thoroughfare to snap photos.  Before my knee started giving me trouble I used to walk that route daily but I don't recall being wowed by the view, although I suspected that tree trimming and removal in the area may have opened the vista.  I decided to check it out.

But before I walked up to the viewing spot, I took a brief detour down a nature trail that sits just feet beyond the turn-off into our neighborhood.  I've walked this route before but I don't think I've photographed it.

As the path was nearly covered in foot-high grass and I'd already interfered with one jogger's run, I turned back in the direction of the main road not far beyond this point.  That took me by this:


The view spot is a quarter mile or less up the road.  Late afternoon isn't the best time to take photos but here are the best of those I took.


Try as I did, I couldn't make out my own home from this vantage point.  We sit further up and farther to the west.  However, there was another, smaller view spot closer to our neighborhood road and, when I cropped that photo a bit, I was able to make out our house.  Do you see it? 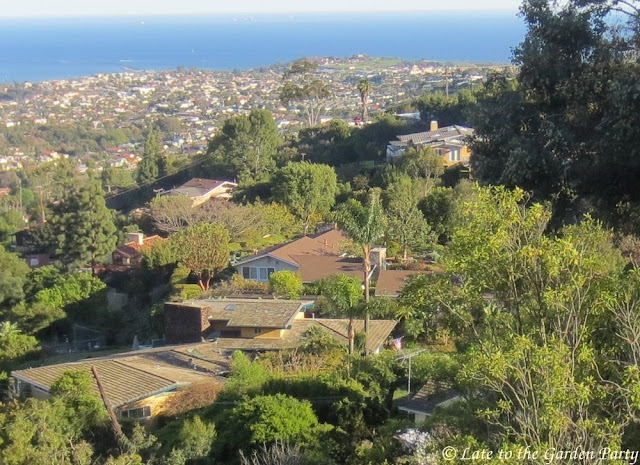 When we moved in, after many years of living in a closely-packed beach city with neighbors literally on top of one another, we were thrilled by how much breathing space there was between us and our neighbors.  But although we may have more space than the community crowded around the harbor below us or the beach city we previously called home, it really isn't all that spacious as the photo above shows.