In (yet another new) Vase on Monday

I met a friend for lunch on Saturday and afterwards we walked off our heavy meal strolling shops in a recently refurbished mall.  We checked out a place specializing in luxury home furnishings and I ended up walking out with yet another new vase.  It was offered at a good (reduced) price and unique, modeled on a bighorn sheep's horn.  I couldn't bring myself to pass it up.

My first thought was that it would work well with an air plant (Tillandsia) or succulent cuttings but I ended up using flowers instead.


I'd originally planned on a vase using orange and yellow flowers for the front entry so I went ahead and put that together too.  The color scheme was based on the small flowers of Grevillea rosmarinifolia x alpina, which I've been admiring for several weeks now.


Lest you think I neglected my dining table, I took care of that spot earlier in the week when I trimmed back the larger of my 2 Leucadendron 'Wilson's Wonder' shrubs.

The new vase ended up on the coffee table in the living room, while the second vase took its intended place in the front entry. 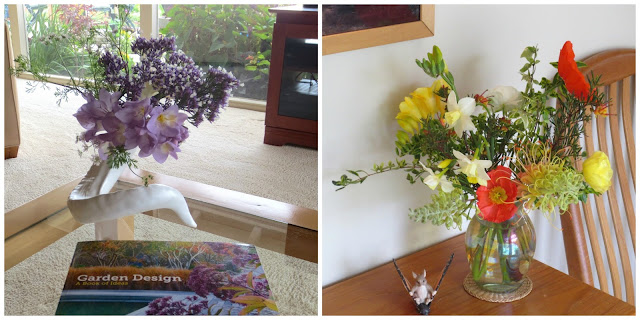 Visit Cathy at Rambling in the Garden to see more "In a Vase on Monday" floral/foliage arrangements.