In a Vase on Monday: Oops, I did it again

Regular readers probably won't believe me when I state that I rarely plan on preparing more than one arrangement for "In a Vase on Monday," the meme hosted by Cathy of Rambling in the Garden.  When I step out into my garden to look for material, I feel lucky if I have just one idea as to what to pick as a floral focus.  On Sunday, when I ventured out following a storm that brought us just 0.04/inch of rain overnight, I headed straight for an orchid stem I'd discovered in a corner of the property the day before when I was cleaning up after the tree trimmers we'd had on-site that morning.  The unusual color combination in the orchid had me combing the rest of the garden looking for burgundy accents.


As I was rounding the opposite end of our property, I noticed that the first bud of Camellia 'Taylor's Perfection' had bloomed.  More rain is expected on Thursday and the Camellia blooms don't like rain so I decided to clip that flower to enjoy it in the house.  One thing led to another and soon I had more than enough material for a second vase.  Oops!


Spending time outside collecting plant material was particularly enjoyable as the air was cool and fresh.  We played peek-a-boo with rain clouds all day but received no further precipitation; however, I remain hopeful that we'll get another good soaking later this week.  At present, our seasonal rainfall total (since October 1st) stands at a paltry 1.72 inches. 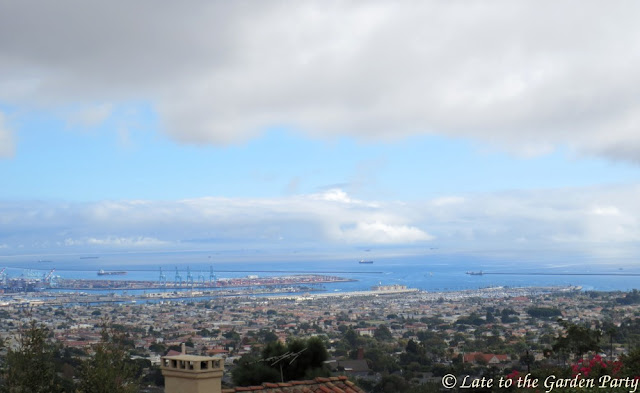 This week's vases are in place.