In a Vase on Monday: Yet more succulents

Camellia sasanqua and Tagetes lemmonii are still blooming in my garden and there are other odds and ends flowering as well but I decided to create another succulent arrangement this week for "In a Vase on Monday," the meme hosted by Cathy at Rambling in the Garden.  My last succulent arrangement lasted 6 weeks so I expect the new one should be good until at least New Year's Day.

This week's arrangement started with Graptoveria 'Fred Ives'.  The plant had become very leggy so I didn't feel bad cutting one of its longest stems.  After its performance in the vase, I'll give it a fresh start in the garden.


Then I added a lot of Graptosedum.

I filled in with a few other succulents.

I cut some Aeonium arboreum but they took up too much room in the vase so I returned them to the garden.  In our climate, they don't need much help to root and form new plants.

I considered using Euphorbia tirucalli 'Sticks on Fire' as colder weather has turned it pretty shades of orange and red but I didn't want to deal with the toxic sap that weeps from the cut stems so I let it be.

Here's what I did include:

This time, I wired only a few of the smaller succulents.  Most had stems long enough to support themselves.  The arrangement sits on the dining room table in an empty basin without water or soil. 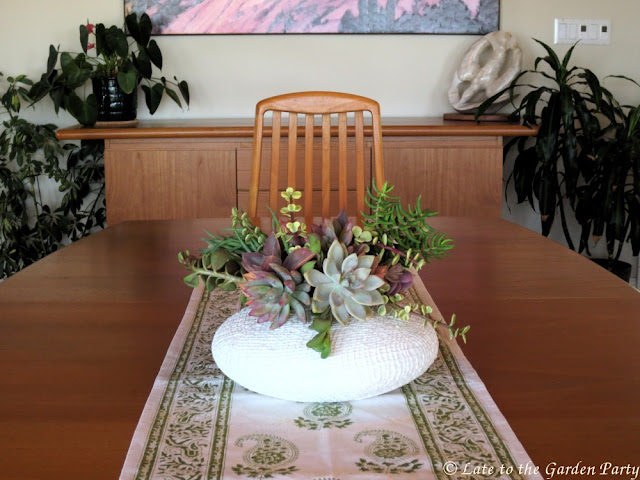 Visit Cathy at Rambling in the Garden to see what she and other gardeners have created using materials on hand this week.