Wide Shots - A Year's Worth of Changes

For this month's wide shots post, I thought I'd compare photos from August 2014 to current views of my garden.  Some show relatively little change, while the changes in others are more pronounced.  I'm pleased with the garden's evolution in some areas, while not so much in others.  In each comparison, the August 2014 view is on the left and the August 2015 view is on the right.

The biggest change in the back garden involved removal of one of the two Agonis flexuosa trees in response to a neighbor's complaints about impairment of her view.  She wanted many of our trees removed but I compromised by removing one and thinning others.  I'm feeling the loss of that tree this summer.

The south side garden hasn't changed dramatically but my battles with the resident raccoons and dry soil continue to present challenges in this area.

The front garden underwent the greatest change in the past year with removal of a large area of lawn.  Lawn removal began in pieces soon after we moved in but this was the most significant removal we'd undertaken.


Last summer, I tried growing corn in my vegetable garden with only a modicum of success.  This year I'm growing sunflowers and zinnias. 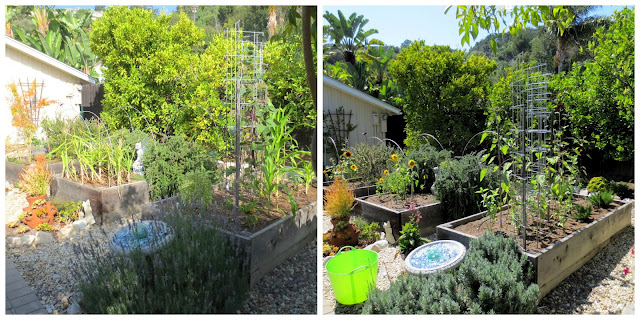 The dry garden has been tweaked but I've made no major changes. 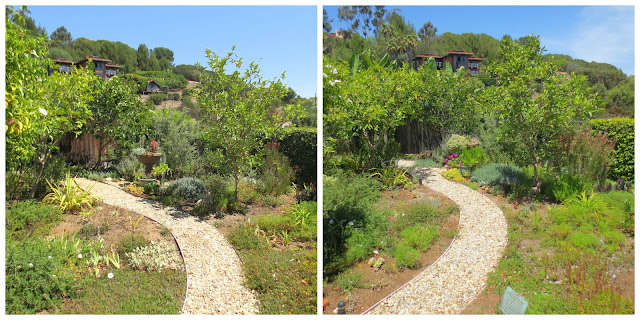 The slope is another area that underwent substantial change.  The giant Yucca elepantipes was removed at the bottom of the slope (at my husband's instigation) in January.  The 3 Pittosporum tenuifolium 'Silver Magic' shrubs I put in afterwards to screen out our view into the neighbor's property are growing slowly but steadily.

The last area I'll show is the street-side succulent bed, which I planted just over a year ago.


Rationing water has proven to be the greatest challenge in the past year.  We cut our water use last year in response to the Governor's call for a voluntary 25% reduction.  This year, our area was told to cut water use by 36% by comparison to 2013 levels.  We've beat the budget set by the water company the past two months by good margins.  Our usage in June was only 73% of our budget but, even with the minor miracles of rain in May and July, the impact on the garden is being felt.  As July's rain gave me about 400 gallons of stored rainwater, I'm going to use that accumulation a little more freely, especially in the back garden where the loss of that tree's shade is being felt.  I ordered more mulch a couple of weeks ago and I've got most of that down in the areas I missed on my first pass a few months ago.  Planting of anything other than succulents is on hold until fall, when the last remaining two sections of lawn will also come out.  Beyond that, I've got my fingers crossed that El Niño is headed our way (hopefully, without floods or mudslides).

Visit Heather at Xericstyle, the blogger responsible for starting the wide shot meme, to see her front garden this month.