In a vase on Monday: Summer and Fall

The pink Eustoma grandiflorum are putting on an encore of their jubilant early summer performance with almost every plant bursting into bloom at once.  Although I'm usually loathe to cut stems when most of the flowers are still in bud, I made an exception this week as there are so many stems coming into bloom.  Also, as temperatures are expected to ramp up again mid-week, I thought it just as well to bring some flowers inside rather than risk having the heat shrivel the buds in their garden beds.

I combined the Eustoma (aka Lisianthus) with some coral-toned flowers for a summery arrangement.


The back view almost looks like an entirely different arrangement, doesn't it?  Here's what I included:

I'd planned to stop at just one vase this week (maybe I need to join flower arrangers anonymous) but the sunflowers called out for attention again.  Although some secondary buds are developing here and there on stems I previously cut, the whole lot is starting to look sad so I cut most of what was in full bloom.  I'm going to clear my raised planters to plant sweet pea seeds soon for early spring blooms anyway - as this year's sweet pea crop perished in a wave of extreme heat in March, planting for blooms very early next year seems my best bet. 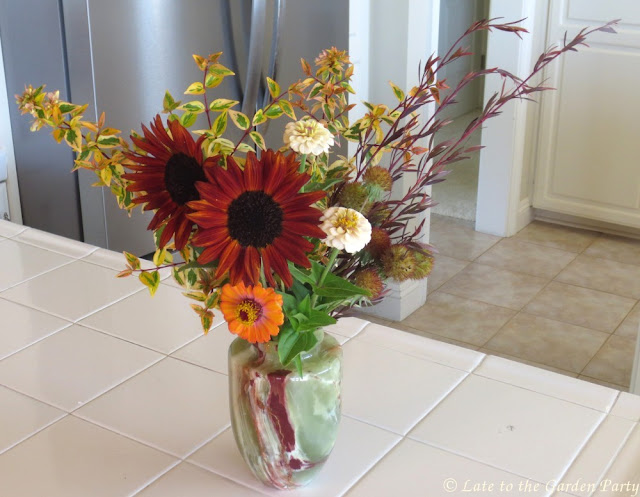 You may note that the sunflowers this week are not the usual deep dark red my mix of "Drop Dead Red" seeds has previously produced.  They're brown!  Or, as my seriously color-blind husband surprisingly informed me, "rust."  Although there are no clear signs of fall in my garden thus far, this bouquet does evoke the feeling of fall.  Here's what I included:

The two vases were consigned to distant areas of the house as they look awful near one another.


For more floral displays, visit Cathy at Rambling in the Garden, the host of this increasingly popular meme.