Homage to a Yucca

Last month I published a post recounting the sad story of the Yucca elephantipes (aka Y. gigantea) seated at the bottom of our back slope on the boundary between our property and that of a neighbor.  After watching the Yucca grow taller and spread further along the slope, my husband tried to trim it back.  That effort, and the Yucca's resilience in making a quick comeback, led my husband to declare war on the plant (much as he'd done many years ago with a Bougainvillea that, no matter how frequently it was trimmed, grew out across the driveway at our old house to scratch the car he'd painstakingly converted from gas to electric power).  When our neighbor came by to discuss the possibility of cutting the Yucca back, my husband mounted a campaign to remove it.  Although he has been known to blink at what I spend on plants, he didn't blink at the price quoted to cut the massive plant down to 2 feet.  (I, on the other hand, nearly had an apoplectic fit.)  Even the neighbor was surprised when we informed him that we (I'm using the royal "we" here) wished to proceed.

In about 6 hours, the Yucca went from this:

No one was happy about how the landscape service left the Yucca.  Instead of 2 feet tall, it was between 4 and 5 feet tall in places.

In addition to being ugly, the stumps were too tall to cover with soil to speed decay and prevent the plant from growing back.  Yet, they were also too low to provide privacy between the 2 properties.  A representative from the landscape service quoted another choke-worthy fee to cut the stumps flush with the surface of the soil.  We agreed to the plan but recently got another quote from a different tree service representative, who claimed his team could get a stump grinder down the slope to eliminate the risk of regrowth, something the original service claimed was impossible.  We accepted his proposal.

The new team arrived on Tuesday, just as I was leaving for the day.  My husband told me that getting the stump grinder down the relatively steep slope proved more difficult than anticipated by the new service.  Fortunately, the neighbor on the other side of us agreed to allow us to move it through the back of her property. 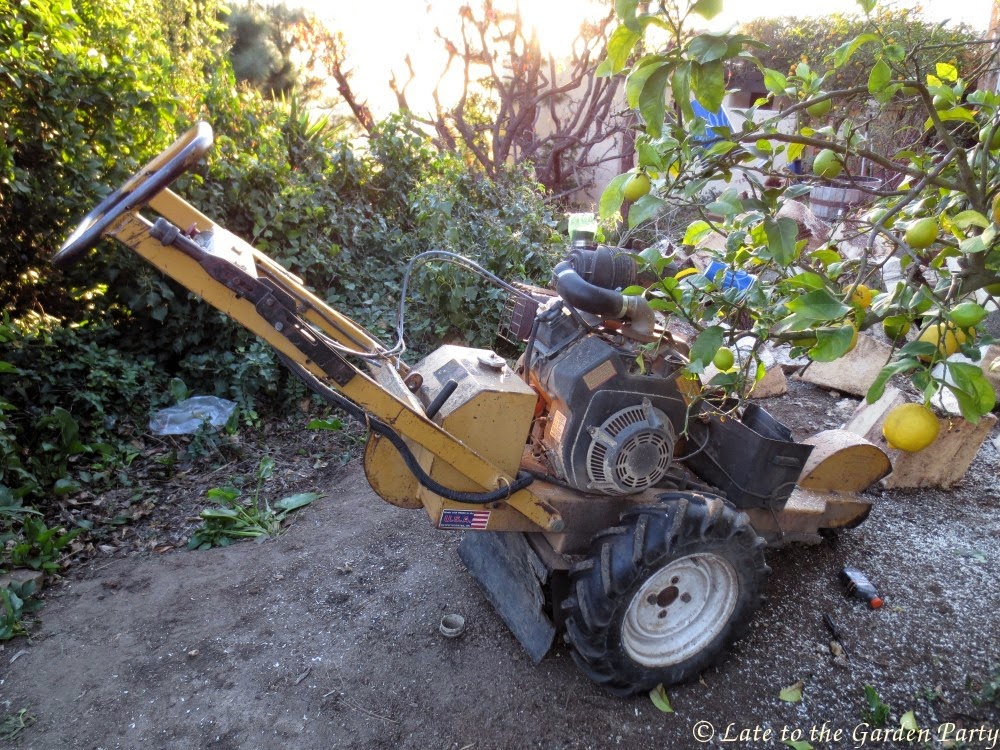 With that obstacle removed, the team got to work.  I came home that evening to find the work half-done, with the crew scheduled to return early the next morning - in exchange for a still larger fee.

After another 9 hours of work on that second day, all that was visible was sawdust and mud:


Now what remains is to determine what we should plant to create a new screen between the 2 properties.  I've proposed planting 3 Pittosporum tenuifolium 'Silver Sheen' but the neighbor has yet to respond.  Although we believe the Yucca, or most of it anyway, was inside our property line, I want to ensure that the neighbors are comfortable with the choice.  They've told us the Yucca was already tree-height 34 years ago when they moved in and I know the wife was upset by its removal.  The privacy issue is also greater for them - we're impacted only when we're on the back slope but they face the newly bare area every time they go into their backyard.  The Pittosporum, a handsome if unexciting plant, has the advantage of being fast-growing, reaching a height of 6 feet in as little as a year.  In a group of 3, it should provide an effective screen, while allowing light and air to move easily through it.  It's also moderately drought tolerant.

While I do like the increased light and improved views of the harbor from the back slope, I'm nonetheless sad to see the Yucca reduced to a soggy mass of dust.  And I know that the hummingbirds and I will miss the flowers. 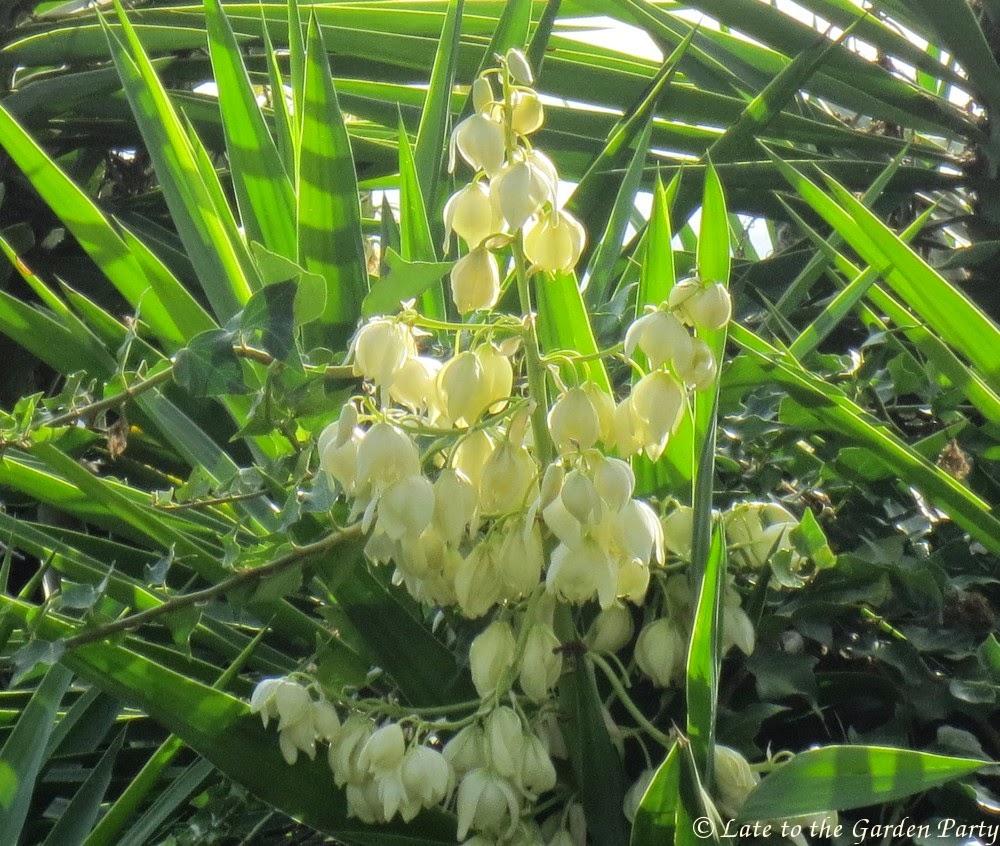 But I can always visit the handsome, well-maintained Yucca elephantipes at the local botanic garden, just 5 miles away. 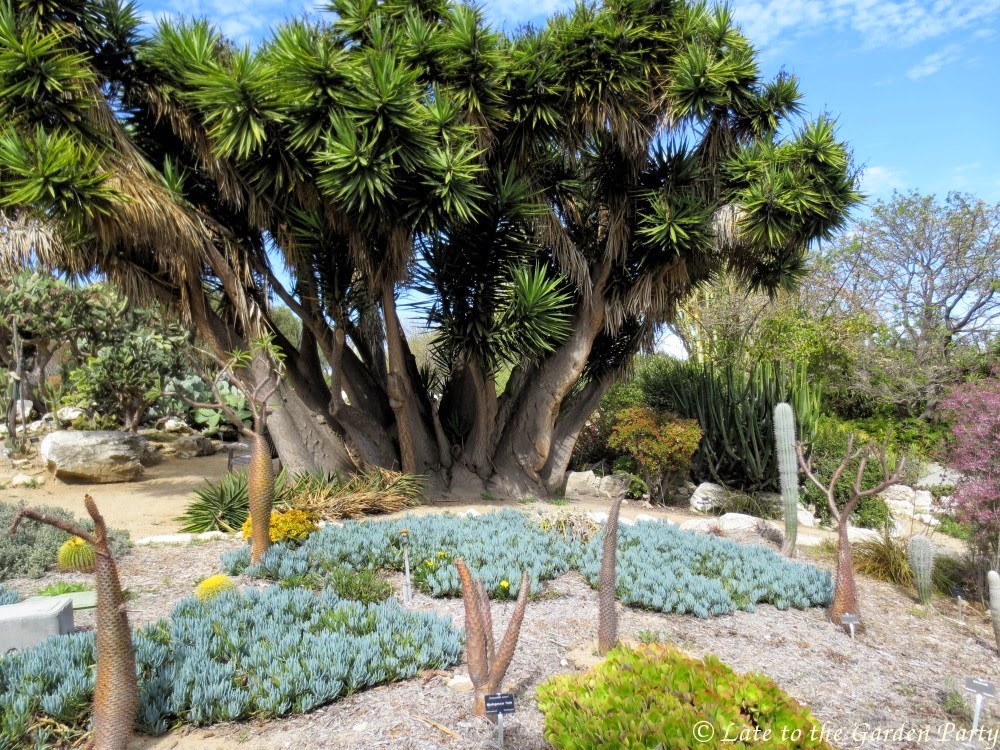