It's All About the View

My husband and I recently brought home 2 large outdoor chairs from his parents' house.  As their old metal patio set also didn't have a home, it ended up here too.  These additions required me to juggle what we already had to accommodate the new additions.

The chairs were placed on the back porch facing an existing garden bench.  They replaced a pair of wicker chairs we've had for at least a dozen years. 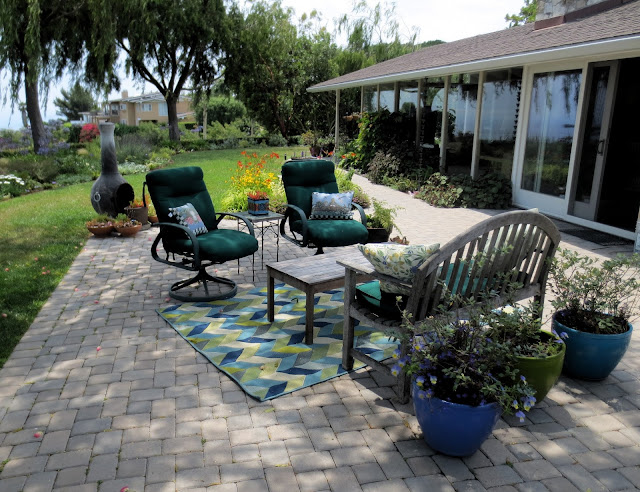 Frankly, I'm not overly fond of the "new" chairs but my husband wanted them so home they came.   I admit that they're far more comfortable than the decaying wicker chairs we formerly had there.  They also swivel, which allows people seated in them to face either whomever is seated on the bench or the all important view.


Our backyard overlooks the Los Angeles harbor.  The view is very important to homeowners here and, as we discovered after moving in, it can be the source of neighborly conflicts.  Our community has what's billed as one of the most rigorous "view preservation" laws in the country.  Since our arrival, we've had 2 requests to cut back trees to preserve the views of different neighbors.  The first request was relatively easy to accommodate.  It involved the removal of a haggard banana tree at the bottom of the slope at the very back of our property.  The second request required a more difficult decision.  It meant the removal of the much older, 60 foot Eucalyptus tree that dominated our side yard.  After lengthy discussions with the neighbor making the request and meetings with 2 different arborists, we agreed to the tree's removal earlier this year.  I wrote about that event here.

Putting local politics aside, the change in furnishings on the back porch allows visitors to see the harbor regardless of where they choose to sit.  As to the wicker chairs, I'd originally planned on dumping them.  However, although they're clearly showing their age, their structure is still intact and the cushions I've got on them make them comfortable.  So, instead of tossing them, I've moved them to the northwest side of the house, where they now face my dry garden.


The dry garden area wasn't much to look at when we moved in 2 and a half years ago.  Actually, it was just plain ugly.  Originally, about one-third of it was covered with half-dead grass.  A hodge-podge collection of fruit trees comprised the remaining two-thirds of the area.  Most of the trees were added by the former owner in the year prior to our purchase of the property.  They were planted much too close together and many of the varieties were poorly suited to this climate zone.  The collection included a misshapen fig tree, a couple of guava trees, a persimmon tree, an apricot tree, 3 struggling apple trees, a diseased "fruit cocktail" tree (comprised of 3 fruiting tree varieties grafted together), and a grapevine.  The "orchard" was covered with small rocks and there was a layer of heavy plastic about 4 inches below the soil level, presumably intended to suppress weeds.  There was no obvious pathway to the sloped area below, which can only be accessed through this area.   Unfortunately, I didn't take any pictures of the area before I started work on it so you'll have to take my word that it has changed a lot.  Here's one view of what it looks like now:


All of the grass is gone.  The misshapen fig tree, which would have been in the middle of the rock walkway (across from the rabbit), was removed.  The fruit cocktail tree, which fruited poorly and encroached upon the grape vine, was also removed.  The apricot tree died of its own accord, despite my best efforts to keep it alive.  The apple trees, which were little more than half-dead sticks, were removed but a cherry tree sapling, removed from the slope, was replanted here (along the stairway leading down the slope, not readily visible in the picture above).  The existing persimmon tree and 2 guava trees were retained.  An arbor, constructed by my husband, was added in the back to support the grapevine.  All the other plants were added by me since our arrival.  Rocks, dug out of the surrounding area, were used to fill in the pathways here and in the vegetable garden.  (The weeds growing into the path were supplied by mother nature - I'll get to them one day.)  To improve drainage I pulled the plastic out in sections as I dug out the bedding area.

I spend a fair amount of time working in the dry garden and the slope below so the new seating area will be a welcome place to plunk myself down for a rest.  It also provides a vantage point from which to enjoy the fruits of my labors (no pun intended).

The small metal patio set inherited from my in-laws replaced the even smaller table and 2 chairs I previously had on the other side of the house, off the living room.  I added a funky screen a friend of my husband's gave us.  The screen has moved from area to area looking for a place to stay since we received it several months ago.  I'm not sure it will remain in its present location but, for now, at least it provides something for a potted Hoya plant to climb along.  Eventually, I think I'd like to remove some of the animal figures in the screen, possibly replacing them with pieces of colored glass. 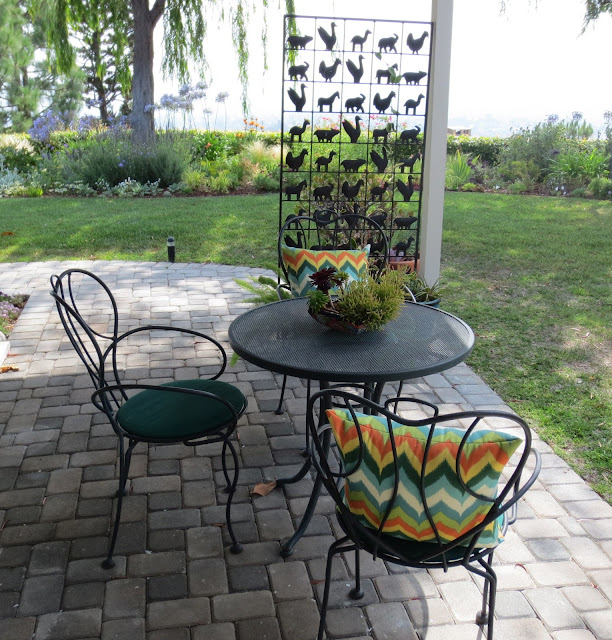 This seating area looks out upon what was once a shade garden bordering the site of the former Eucalyptus tree.  I wrote about the changes made to this garden bed after the tree's removal here.  More changes are likely as some plants are still struggling with the transition from a shade to full sun exposure.  In addition, the grass area between this side porch and the planting bed is in horrible shape, due in part to the beating it took during the tree's removal.  I've decided that much of this grass must be removed, although I'm not sure how much of this project I want to attempt during the heat of summer.  Right now, I'm focused on just extending the existing flagstone path from the garden bed up to the paved porch.  I've made a start on that. 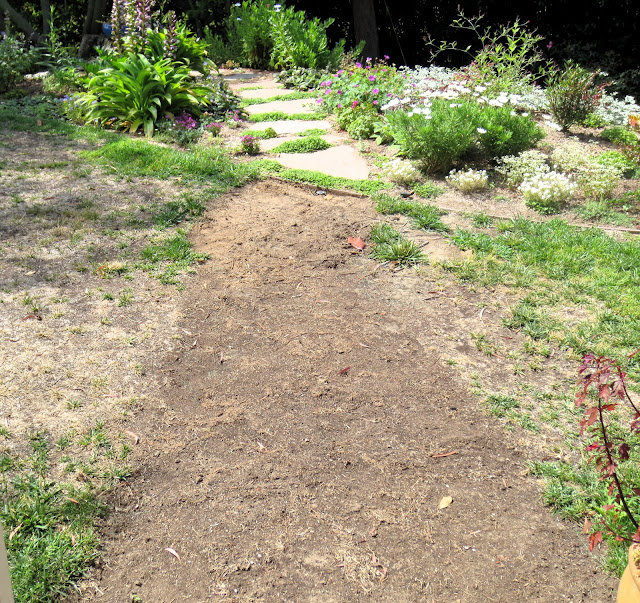 Whatever I do in replanting the side yard once the grass has been removed, once again I have to consider the impact to the view from the seating area, as well as from the living room.  My husband has already advised (warned?) me that he doesn't want the harbor view obstructed from this vantage point.


Seating arrangements - they're all about the view.

Posted by Kris Peterson at 7:31 PM