I'm generally loathe to cut any flowers which are in short supply, which is the reason many of the bouquets I've posted about week after week feature the same flowers.  I have only two kinds of lilies in my garden - the older variety, which I think is 'Stargazer' is just coming into bloom but a newer, pale pink variety, has been blooming for a few weeks now.  Only one unopened bud remained and more than half the flowers had already given up the ghost so I thought "what the heck" and cut the remaining flowers.  Sadly, this unnamed lily, received as a gift with a purchase of other bulbs, has no scent whatsoever.

I immediately identified Pentas 'Kaleidoscope Appleblossom' as a good companion but I was stuck as to what else to include.  The lily and the pentas, while pretty together, are very similar in color so the bouquet needed something to add punch.  I considered a dark pink oleander (Nerium oleander).  The oleander is part of my neighbor's hedge but heavy, flower-laden branches are now hanging over into our side yard.  The dark pink provided a good accent to the lighter pink but all parts of the oleander are poisonous and I couldn't help worrying that one of my two cats might choose to take a nibble.  Despite the fact that I provide them with nice organic wheat grass, both have a tendency to chew on houseplants even when these are coated with a nasty "no chew" spray.  I couldn't risk it.


I tried adding bluish purple statice (Limonium perezii) but I thought it detracted from the combination rather than contributing to it.  I tend to prefer harmonious combinations to stark contrasts so I decided to keep to pink tones.  Here's what I came up with: 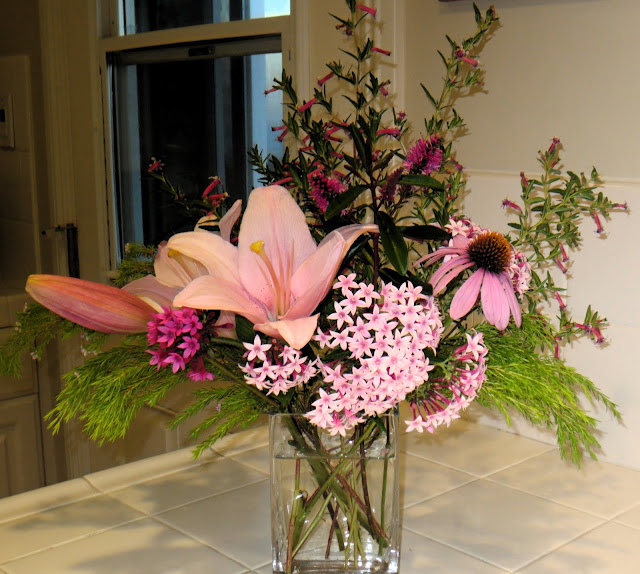 In addition to the unnamed lily and the Pentas 'Kaleidoscope Appleblossom' I included:


The Coleonema (aka Breath of Heaven) picks up the lime green center of the lily (not readily visible in the picture above).  I also found that one of the three plants in my front border is currently sporting tiny pink flowers.  This winter/spring flowering plant bloomed in late winter so it's a surprise to find it in bloom again in the middle of summer.


The Echinacea and Hebe are bit players in the arrangement.


That's it for this week's contribution to the Garden Appreciation Society, hosted by Erin at The Impatient Gardener.  If only I could construct a bouquet from mimosa tree foliage and flowers...

Posted by Kris Peterson at 8:49 AM