In a Vase on Monday: Limited options

At present my cutting garden has nothing to offer other than the occasional bloom from Dahlia 'Lavender Ruffles', which still hasn't give up the ghost.  The foxgloves I planted don't show signs of flowering anytime soon and while the many of the seeds I've sown have germinated, I don't expect to see them or the Anemone coronaria corms in bloom for months yet.  I had a hard time this week coming up with material to fill one vase, much less two, but I persevered.

The inspiration for my first arrangement were the bush violets (Barleria obtusa) in my front garden.  I cut several stems but, after a little rain on Friday, the flowers looked bedraggled and I ended up discarding them.  They established the color scheme, though.

I targeted the flowers of the Hong Kong orchid tree (Bauhinia x blakeana) for a second arrangement; however, cutting those is a challenge as most of them were far above my head and I hate ladders.  (I'm also stubborn about requesting help from my husband, especially when he's busy with his own projects.)  I'd planned to make do with one short stem but, when I decided to pull out my loppers to tackle a few of the tree's twiggy stems, I managed to capture two more flowering stems in the process.

While we did get rain on Friday, it wasn't much, just 0.17/inch (4.32mm).  The heavier rain originally forecast for Sunday failed to materialize  - we got 0.02/inch in my area.  It looks like La Niña's hold on us remains intact. 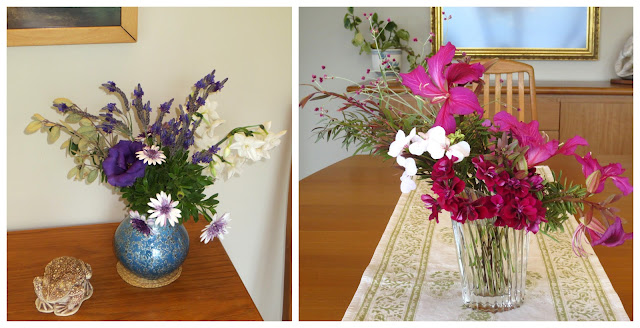