In a Vase on Monday: You can't rush Mother Nature

Once a handful of dahlias began to bloom last month, I thought the remainder would be close behind but it seems that their schedule and mine aren't in sync.  Three of the stragglers have buds, while five other plants - all healthy - still show no signs of these.  A possum (or raccoon) dug through the raised planters in my cutting garden on Saturday night, compromising the health of yet another plant, the last to sprout.  While I wait out all the slow-pokes, I'm making the most of the six dahlias willing to offer flowers.

I've featured the yellow-flowered Dahlia 'Calin' in IAVOM posts twice already but this week I decided it was past time to show off Dahlia 'Summer's End'.

I've used Dahlia 'Southern Belle', the first of my dahlias to bloom this year, once before in a Monday post.  This week I chose to pair it with Amaryllis belladonna flowers while they last.  Our temperatures climbed into the mid-90sF/35C this weekend and the Amaryllis quickly showed signs of stress.

As usual, there were leftovers among the flowers I cut.  The humidity that accompanied the monsoonal weather in the desert areas to the east of us prompted another flush of bloom from Callistemon 'Cane's Hybrid'.  I'd planned to add the peachy flowers to the first arrangement to pick up the peach tones in Dahlia 'Summer's End'; however, the Callistemon's peachy-pink flowers didn't combine well with the Zinnia 'Queen Lime Orange' so the Callistemon was bounced, ending up in a small vase on the kitchen island. 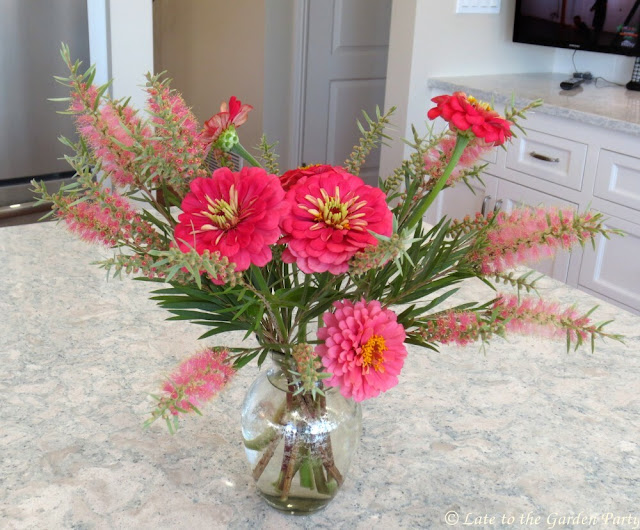 It looks like temperatures may drop slightly over the course of the week but humidity will remain high.  Southern California's reputation for "dry heat" seems to be but a memory. 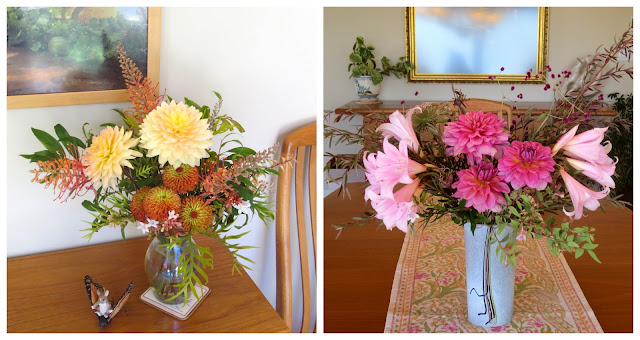