In a Vase on Monday: A nod to Independence Day

Given the majority of the US Supreme Court decisions released over the past two weeks and the testimony coming out of the Select Committee to Investigate the January 6th Attack on the US Capitol in 2020 it's hard to feel patriotic right now.  I remain hopeful that people will come out to vote in November for a slate of representatives that will do a better job of carrying out the expectations held by the majority of Americans so we can begin to dismantle the harm that's been caused and prevent further harm to human rights.  Given the widespread ban on the use of fireworks in Los Angeles County except by state-licensed pyrotechnicians due to our heightened fire risk, I also hope that tonight will be calmer than most July 4th holidays.  Neither the ban nor the hefty fines for noncompliance have entirely stopped all the "practice" fireworks we've heard over the last several days but at least there do seem to be less of those.

My first arrangement channels the red, white and blue colors that characterize the holiday, albeit with more emphasis on the blue and white.

My dahlias are still taking their time about blooming, although a single flower was close enough to it to cut for my second arrangement.

Several stems from last week's vase made it into the vase on my kitchen island.

For more IAVOM creations, visit Cathy at Rambling in the Garden.  For those of you celebrating the 4th of July, best wishes.  I have trust that the vast majority of gardeners take climate change far more seriously than certain members of the US Supreme Court. 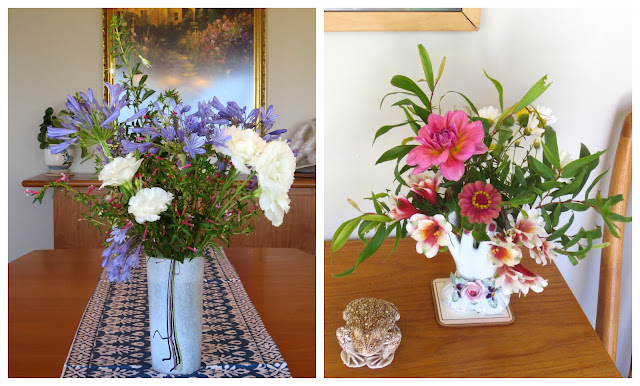