In a Vase on Monday: Large, medium & small

A few new blooms popped up last week but there wasn't a plentiful supply of any of them so the challenge was what to make of each.  That led to three arrangements: one large, one medium-sized, and one small.

The largest arrangement was designed around stems of Delphinium 'Cobalt Dreams' from my cutting garden.  I cut the plant back in April after its first flush of blooms and it exploded with another flush this month.  The floral stalks were much taller this time and one of them toppled over under its own weight late last week.  I put the broken stem in water, which made it an obvious starting point for an IAVOM arrangement.

My second, medium-sized arrangement was inspired by the first Lilium 'Pretty Woman' bloom, which I paired with stems of Dahlia 'Southern Belle'.

The third arrangement was an after-thought.  Dahlia 'Summer's End' bloomed on the heels of 'Southern Belle' last week and the first flowers were already fading so I cut two of them to fill the small vase that sits on our kitchen island.

Two other lilies bloomed this past weekend but I didn't have any idea what to do with them so they may sidestep the limelight this year.  The rabbits stripped several lily stems of all their leaves before I realized what they were up to, which meant no blooms this year and probably doesn't bode well for future flowers. 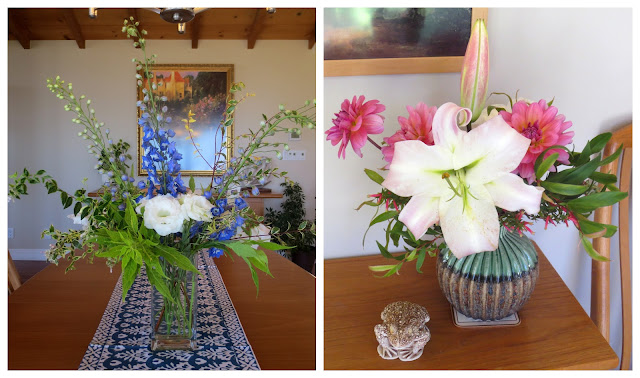