In a Vase on Monday: Iceberg ahead!

After a VERY long wait, Dahlia 'Iceberg' has produced its first blooms just as the other dahlias in my garden are finishing up.  I pulled several dahlias out of my cutting garden on Saturday, dumping those I don't intend to store as tubers through the winter.  I'm already late in planting the bulbs and sowing the seeds for my cool season flower garden and I need to free up space, especially as it now seems summer may have given up its hold on my part of the country.

My second arrangement couldn't be more different from the first, at least in terms of color.  Dahlia 'Gitt's Crazy' is still pumping out a steady supply of flowers, eclipsing even 'Enchantress', which has dramatically slowed down with respect to its floral output over the past two weeks.

As I finish this post, the service I use to track local weather predicts a 100% chance of rain today.  The trailing end of the extreme weather system that hit the northern part of the state, variously described as a "bomb cyclone" and an "atmospheric river," is expected to reach my part of Southern California by mid-day; however, it's not expected to pack the punch it unleashed on Northern California.  We're projected to get just one-third of an inch of rain here.  What I've read about the impact of climate change on California unfortunately seems to be bearing out: we'll continue to experience extended periods of severe drought, punctuated by periodic, potentially destructive, atmospheric rivers, creating flash floods and mudslides, especially in areas previously hit by wildfires. 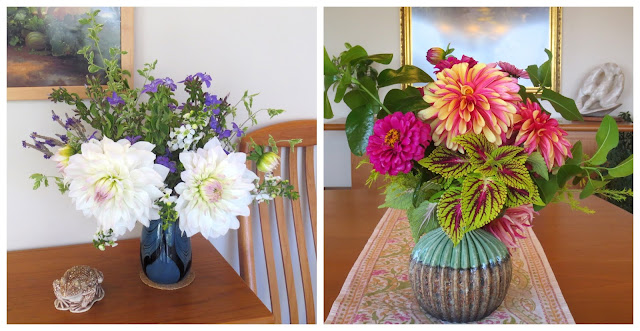