In a Vase on Monday: The triplets get a new look

The unbroken blooms of Hippeaestrum 'Aphrodite' I used in my first arrangement last week did indeed open gradually over the course of the week.  The broken stem I placed in a tiny bowl of water also survived the week in remarkably good shape.  As I have two other 'Aphrodites' in the process of maturing, I decided to reuse the original flowers in a new arrangement featuring the triplets I introduced back in early February.

I created a more conventional arrangement using the first Scilla peruviana (aka Portuguese squill) as my focal point.

Unable to stop there, I took advantage of new snapdragon blooms to create a third arrangement.  I love snapdragons but they generally don't do well here.  Within just a few weeks of planting, the foliage is usually covered in rust.  Periods of high humidity followed by high temperatures promote rust, conditions that are prevalent as what passes for winter here transitions into early spring.  Our abnormally dry winter, as well as my scrupulous attention to avoiding splashing any water on their foliage, seems to have prevented (or at least delayed) the rust problem this year.

We have a good chance of rain later this week.  It's not expected to amount to much but at least it should bring our total rain for the "water year" (counted from October 1st) above the three inch mark at last. 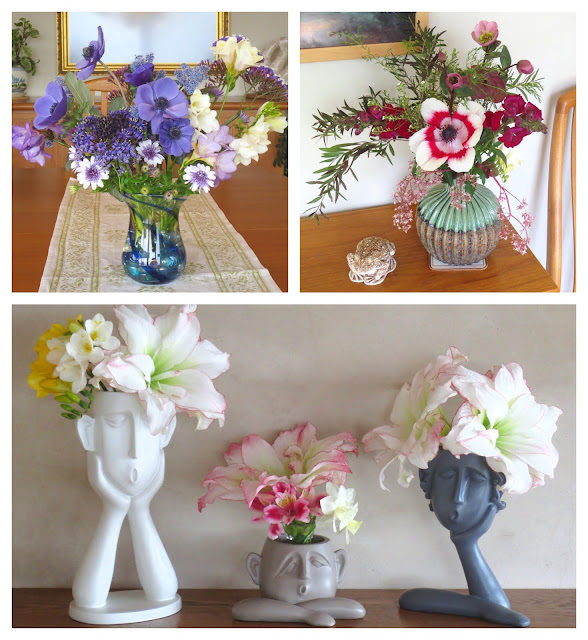