In a Vase on Monday: In remembrance of the Notorious RBG

We received yet another blow to the gut last week when news came that the Notorious RBG, the esteemed US Supreme Court Justice Ruth Bader Ginsburg, passed away on Friday.  As the news was reported, I literally stood up and shouted "NO!" at the TV as if I could stop what had already happened.  She had a difficult climb to reach the pinnacle of the nation's judicial system, only the second woman to be appointed to that station, and she spent her 27 years there pursuing the cause of equal justice under the law.  Everyone knew she was ill as she'd fought various forms of cancer over the past decade but she was a fighter who seldom lost a day of testimony before the court throughout those battles.  Many, myself included, hoped and prayed that she'd outlast the current administration but that was not to be.  We owe her much and can only hope that we can channel some of the courage, strength, and dedication to the causes she pursued on our behalf.  Anyone unfamiliar with her history or achievements can find a summary here.

Flowers are a traditional form of remembrance and, other than tears and a commitment to pursue the battles she fought using my vote in the coming and future elections and whatever my pocketbook can spare, flowers are the best I have to offer today.

For other IAVOM creations, visit our host, Cathy at Rambling in the Garden. 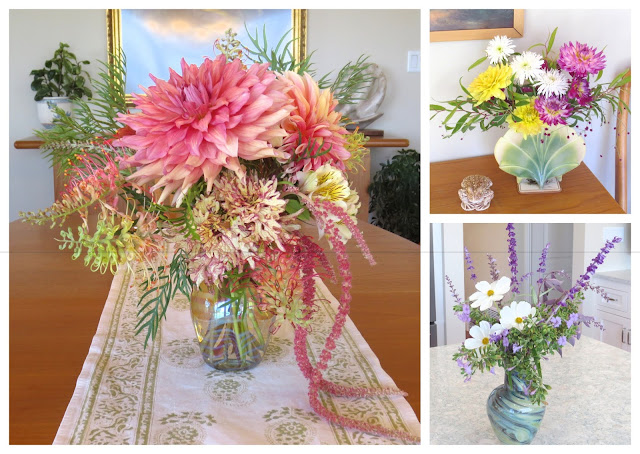 The political fight over RBG's replacement is already gearing up and it threatens to eclipse our mourning of her loss as hypocrites in the Senate (who refused former President Obama a vote on his Supreme Court candidate's nomination 7 months before the last election because the selection was "too close" to the next presidential election) now rush to fill her seat before this November's election.  I think they may underestimate the response if they pursue that goal - I believe that the backlash may cost them much more than they realize in the long run.  VOTE!!!