In a Vase on Monday: Escapees from the brutal heat

Unfortunately, the weather forecasters were right last week when they predicted a miserable record-breaking heatwave.  For two days prior to the heatwave's arrival I spent early mornings and early evenings hand-watering sensitive areas of my garden.  Even so, I was still scrambling on Saturday and again early Sunday to cover areas I'd missed on my initial rounds.  As Sunday was supposed to be particularly nasty, I cut flowers for "In a Vase on Monday" early Saturday morning rather than Sunday as I normally do.  In retrospect, I only wish I'd cut everything that was in full bloom in my cutting garden.  Our temperature didn't drop overnight on Saturday - when I went to bed near midnight, it was still 100F (37.8C), down from a mid-day peak of 106F (41C), and when I got up in the morning the temperature was the same.  It quickly rose over the course of Sunday morning and got stuck on 108F (42C) for most of the day.  Other areas, like our inland valleys, had it far worse, though.  The inland valley I grew up in peaked at 121F (49.4C) on Sunday.

Luckily, on Saturday I'd cut both of the Dahlia 'Einstein' blooms in my cutting garden, as well as several Zinnia stems and selected fillers from other areas of the garden.

The last gladiola in my cutting garden was already struggling so I cut that too and searched the garden for a few companions.  Another of my 'Bright Star' Yuccas was in full bloom and, although I wasn't sure how its stems would hold up in a vase, I cut two of those as well.


The first bloom of Dahlia 'Belle of Barmera' has been opening every so slowly in the cutting garden and I'd hoped to include it with this week's arrangements but, as of Sunday evening, it still wasn't fully open.

The heat isn't expected to abate significantly until Tuesday and even then it'll remain above average through the balance of the week.  We haven't had a power outage thus far but our air conditioning has been running continuously.  The window shades are down throughout the house so it feels a little cave-like.  I've ventured outside several times but it isn't pleasant.

I hope your weather isn't as brutal!  For more IAVOM creations, visit the meme's host, Cathy at Rambling in the Garden. 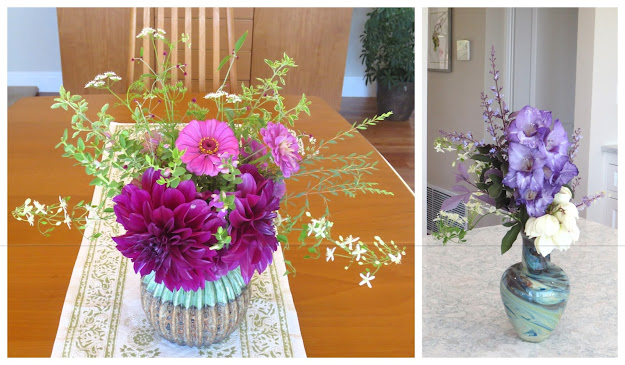