We got a teeny tiny amount of rain Saturday night and awoke on Sunday (late due to the start of Daylight Savings Time) to clear blue skies, scrubbed clean of their usual dingy brown layer of smog, a few lingering fluffy white clouds, and bright sunlight.

The sunny scene inspired the contents for my first vase.

My second vase is very different in terms of color and contains a mix I'm fairly certain I've used before; however, it shares a connection to the first arrangement in that both vases provide examples of nyctinasty.  Nyctinasty describes the natural phenomenon which causes leaves and/or flowers of certain plants to close in response to diminished light levels.  Interesting as that is, it's a bit irritating when it comes to creating flower arrangements.  I usually avoid using flowers with this characteristic but I'd utterly forgotten that the South African Iris relative, Aristea inaequalis, did that when I cut two stems for my first vase.  I remembered it when I found myself struggling to find open flowers to photograph.  In the case of the second vase, it wasn't the flowers that presented an issue but rather the foliage.

Finally, as I've grown accustomed to eating breakfast with flowers on the kitchen island, I cut a few florets from the florescent yellow bloom stalks of the succulent Aeonium arboreum to fill a small cactus-shaped vase.  Much as I love flowers, I'm not particularly fond of these flower stalks, which give the succulents a misshapen appearance.  In February, I had a dozen or more of them and, as new ones continue to appear, I've started cutting the older, scruffier stalks down so I decided to use a few of the florets before they all end up in our green waste bin.

For more In a Vase on Monday creations, visit Cathy at Rambling in the Garden. 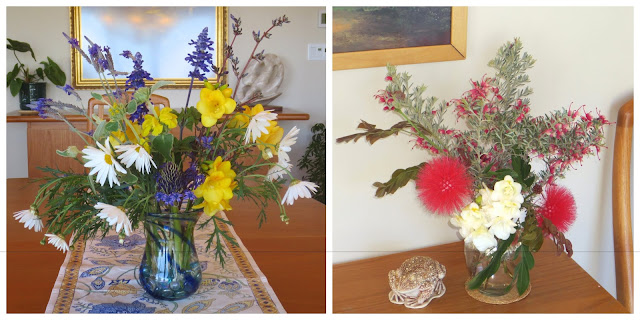