In a Vase on Monday: There's always something

Stepping into the garden to cut flowers and foliage for "In a Vase on Monday," hosted each week by Cathy of Rambling in the Garden, I'd no big ideas about what to use.  First up, I checked the Helianthus 'Sunfinity Yellow' I'd picked up a few weeks ago to fill an empty pot, but last week's heatwave and some kind of critter left me nothing suitable for cutting.  The few dahlias left in the cutting garden also let me down (even 'Loverboy').  However, some of the Zinnia flowers still looked good, even if the plants themselves don't, so I focused on those.


Despite last week's blast of heat, Plectranthus ciliatus 'Zulu Wonder' continued to produce a steady stream of new blooms and as I still had a few Eustoma grandiflorum (Lisianthus) blooming in the garden, I cut more of both.  As most of last week's Eustoma were still looking good, I also repurposed those for this week's second vase.  It's not an exact match of last week's vase, though, as I altered the supporting cast.


I hadn't planned to duplicate the color schemes I used last week but that's what happened. 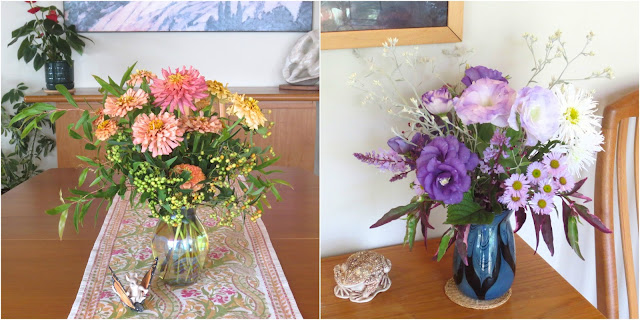 Visit Cathy to discover what she and other gardeners used to fill their vases this week.