In a Vase on Monday: No shortage of flowers now

In my bloom day post, I bemoaned the absence of some of my usual October blooms.  Well, those blooms may have arrived late to the garden party but they're making up for lost time now, even if it feels more like summer than fall here.  Temperatures have soared again, our Santa Ana winds are back, and the red flag warnings signaling heightened fire risk are up once more.

I was prepared to create 3 vases but as usual one thing led to another when I set out looking for flowers and foliage to cut and I spent time pulling weeds and cutting plants back.  By the time I finished, it was too hot to spend much more time outside so I settled for 2 vases.  The first features Senna bicapsularis, also known as Winter or Christmas Senna.  As it always blooms in October here, neither of those common names is meaningful to me, but I expect it must bloom in winter in the northern areas of South America, from which it hails.


I created a second vase featuring Barleria obtusa, the bush violet I used last week.  This week I paired it with late blooming stems of Eustoma grandiflorum 'Black Pearl'.  The latter is prettier than I gave it credit for earlier but not nearly as robust as the other Lisianthus cultivars I've grown.  Of the 24 plugs I planted in spring, only about half a dozen produced flowers and many of the plugs simply withered and died. 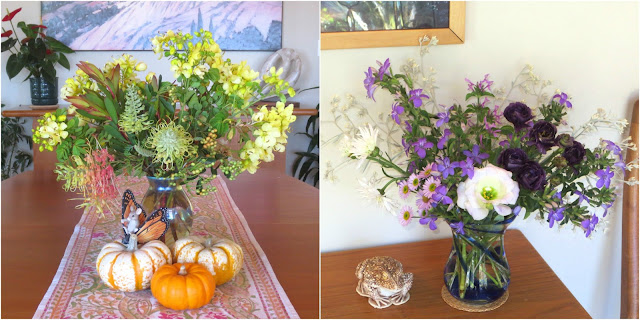