This is a garden blog but I'm going to stretch its boundaries to share photos of last Saturday's Women's March-Los Angeles, as it was a beautiful day in all respects.  After days and days without the sunny skies Southern California is known for, we got a welcome pause in the rain on the day of the march.  Blue sky, clear air (not something Los Angeles is known for!), and cool temperatures were perfect for a walk through the streets of the city with a few hundred thousand other people.  Our bus was forced to drop off me, my 3 companions and 53 other South Bay residents a couple of blocks from Pershing Square, our destination, because the surrounding streets were already teaming with people when we arrived before 9am.  A young girl dressed as an early suffragette greeted us at 6th and Olive. 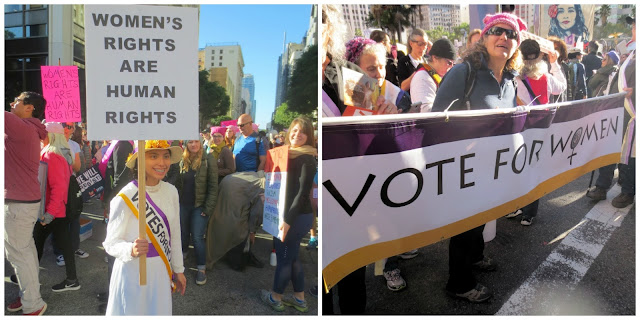 The crowd was already thick and people were stacked all over Pershing Square, making it impossible to reach the speakers' stage there.  We lined up on facing Hill Street in the understanding that was the direction the march would take to the Civic Center just over one mile away.  And that's where we stayed for the next 90 minutes, as the crowd continued to grow.


The organizers expected 70,000 people but unofficial estimates of the number of participants have ranged dramatically from 350,000 to 750,000.  We heard snippets of speeches in the distance but the only thing that came through clearly was the Star Spangled Banner.  The crowd sang along and chants broke out with regularity: "this is what democracy looks like"; "say it loud and say it clear, immigrants are welcome here"; and "love trumps hate," to name but a few.  As time went on, spontaneous chants of "march, march, march" sprang up but, with no forward movement, the crowd began moving out in all directions around 10:30am.  As soon as we moved into adjoining streets, the reason for the quagmire became abundantly clear: all the streets between Pershing Square and Civic Center were jammed solid with people, making movement along one designated route impossible.

My friends and I turned and walked south before heading east to Spring Street, then north to 1st Street and the Civic Center.  People carrying signs were everywhere, representing the diverse causes that drew them to the march.  Some, like mine, contained a laundry list of concerns with the initiatives endorsed by the new government administration, while others were more specific.


Although concerns varied from person-to-person, the crowd was united in opposition to the policies expressed by the new administration and its representatives.  Individuals will undoubtedly coalesce around the issues most important to them but I anticipate that they'll remain supportive of most, if not all, of the causes supported by their fellow marchers.  I haven't actively participated in a political rally before but, if this experience is indicative, I can't speak more highly of the process.  There were no arrests.  There was no violence.  Despite the density of the crowd, there was no pushing or shoving, no unkind words.  There were chants but no screaming - I never even heard a baby cry and there were lots of babies.  We were an assembly of multiple generations - parents, grandparents, and children.  We were an assembly of multiple faiths, ethnicities and races.   Things didn't go exactly as planned.  They went better than could have been planned.  It was a beautiful day - and a perfect antidote for the dismay and dread I felt after the dystopian inaugural address.

This compilation of photos is my Wednesday Vignette, a stretch of the concept perhaps, as well as a deviation from my usual focus on gardens and gardening.  For more Wednesday Vignettes, please visit Anna at Flutter & Hum.


P.S.  For the record, there are gardens in downtown Los Angeles.  Here's one: