It's very hard not to feel blue now.  I hesitate every morning before I turn on the news and, on more mornings than I can now count, I wish afterwards that I hadn't.  But our world of 24/7 newscasts and social media outlets doesn't permit us to hide from current events and I suppose it's pointless to aim for that.  Still, I find comfort in friends, family and people like yourselves that nourish the earth and look for the beauty it can provide.

The unnamed blue Eustoma grandiflorum (Lisianthus) I planted from plugs in April produced 2 flowering stems, which I cut this week in the hope that the plants will respond by branching out.  I meant to make them the centerpiece of my arrangement for "In a Vase on Monday," the meme hosted by Cathy at Rambling in the Garden, but I think the Agapanthus I added to fill out the arrangement assumed the starring role when the vase came together.

Eustoma flowers last a long time in both the garden and a vase but, with the pink forms all blooming at once, I can't expect them to hold out indefinitely so I cut some of those too.  As I've mentioned before, the stems and foliage of these plants, especially those that have been in the ground a year or more have a succulent quality.

Individual stems often have more than a dozen flowers and, even though I've propped them up, they tend to topple when buffeted by wind or weighed down by spray from the overhead irrigation system.  I "rescued" several stems I found with their heads in the dirt for my second vase.  I'm running out of options to complement them so I'm afraid my arrangements are taking on a repetitious quality.


The blue arrangement sits in the front entry. The pink one sits on the dining table. 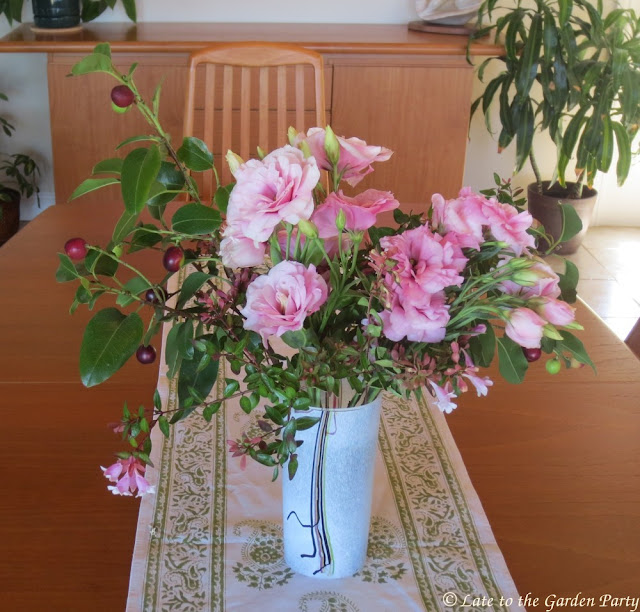 And the stems I removed from the second arrangement when it got too crowded went into a miniature version of that arrangement, which landed in the bedroom. 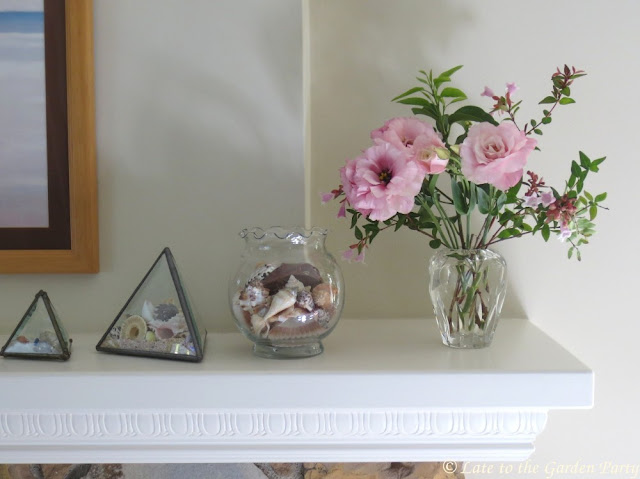 I couldn't bring myself to cut the green Eustoma flowers that opened up last week as I still have just one stem of these.  Perhaps, if and when more appear, I'll find the strength to sacrifice some of these.

Visit Cathy at Rambling in the Garden to see what she and other participating gardeners have come up with this week.