Are any of these Aeoniums up to the challenge?

Early last month, Loree of danger garden announced her Aeonium Challenge, asking other gardeners to create something using one or more Aeoniums.  I have gobs of Aeonium, although not Loree's design talent, but I decided to give it a go.  I've previously used these plants in various areas of my garden, as well as in pots and even in vases, but I didn't want to submit something I already had - what's the fun of that?  As some of my pots were in serious need of a refresh, I decided to start there.  I created 3 new containers, 2 of which included Aeonium.

For my first effort, I used a container given to me by a friend years ago.  She used it as part of a fountain on her balcony.  I asked my husband to drill a hole in it and planted it up.  After 3 or so years, some plants had overgrown the container and others had died but I held off on replanting because its central feature, a Dyckia 'Burgundy Ice', is a nasty character.  It's attractive but it bites.  Getting it out of the container was difficult and cleaning it up so it was presentable for reuse was even more so but I managed.

With 2 minor exceptions, all the plants I used in my refurbished container were taken from elsewhere in my garden.  I selected Aeonium that would complement the Dyckia.


In addition to the Aeonium cuttings, I used cuttings of Senecio vitalis and Kalanchoe fedtschenkoi 'Variegata', divisions of a noID white Aloe, Crassula lycopodiodes (some from my garden, supplemented with a couple of plugs) and another noID Crassula (possibly Crassula pellucida).  I mulched with seashells and tucked in a small ceramic fish.

Here's a closer look at the completed container: 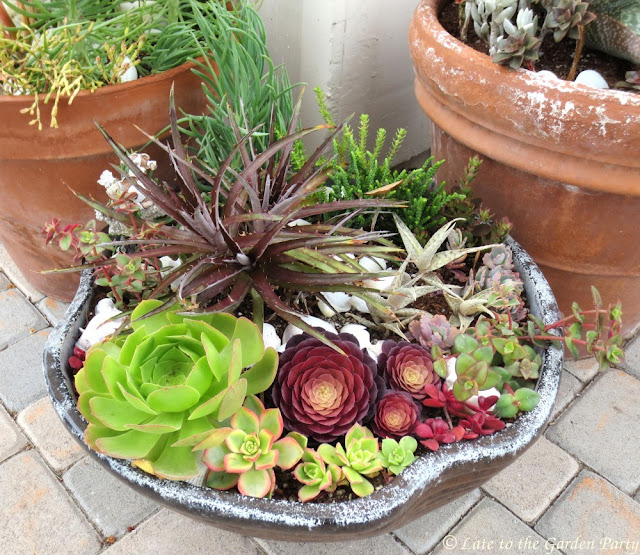 I decided to use a recently purchased Aeonium as the centerpiece of the second container.  It was unlabeled but a nurseryman identified my purchase as A. 'Jolly Green'.

I added cuttings of Aeonium 'Sunburst' from my garden.

I filled in with cuttings of Senecio vitalis, Euphorbia tirucalli and a noID Rhipsalis, more plugs of Crassula lycopodiodes, and a noID Aloe rescued from elsewhere in the garden.  I added more seashells as mulch.  Here's the finished product: 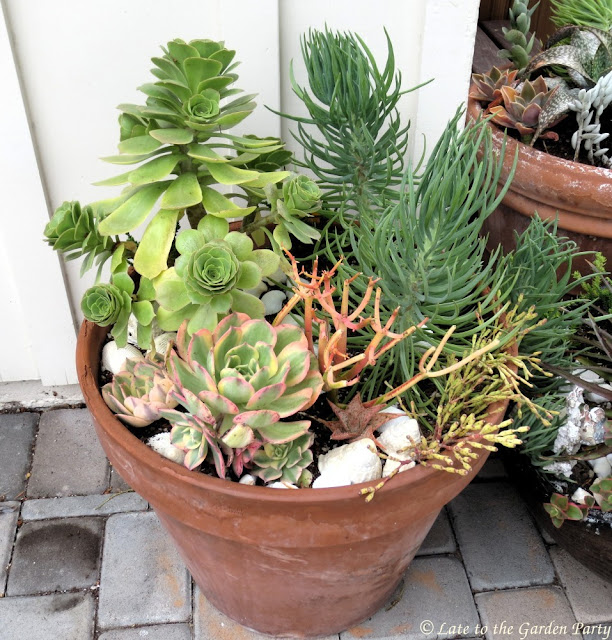 I'd planned to create a terrarium featuring Aeonium but could never get around to it.  However, I did put together a vase using succulents this evening.  The starting point was a natural stone vase I acquired years ago. 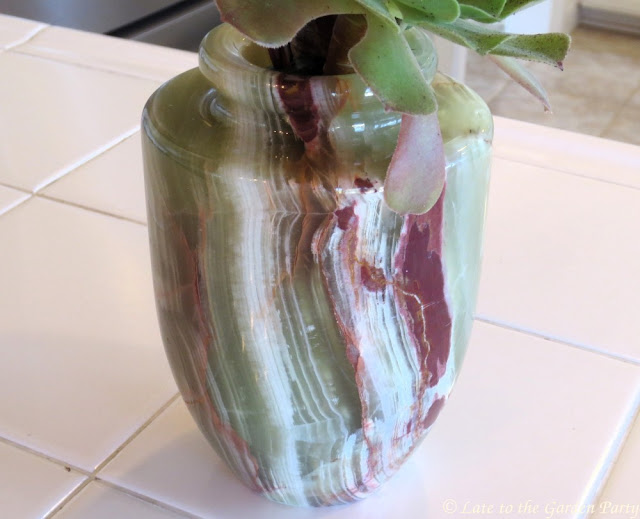 It doesn't hold water well so succulents that don't require water are a perfect choice.  I used 3 varieties of Aeonium that complemented the vase.


I added Crassula pubescens ssp. radicans (currently in flower) and a few stems of Leptospermum 'Copper Glow'.  The latter plant does need water so I stuffed the stems in a small floral tube filled with water.  The relatively narrow opening at the top of the vase prevented other additions.  Here's the finished vase. 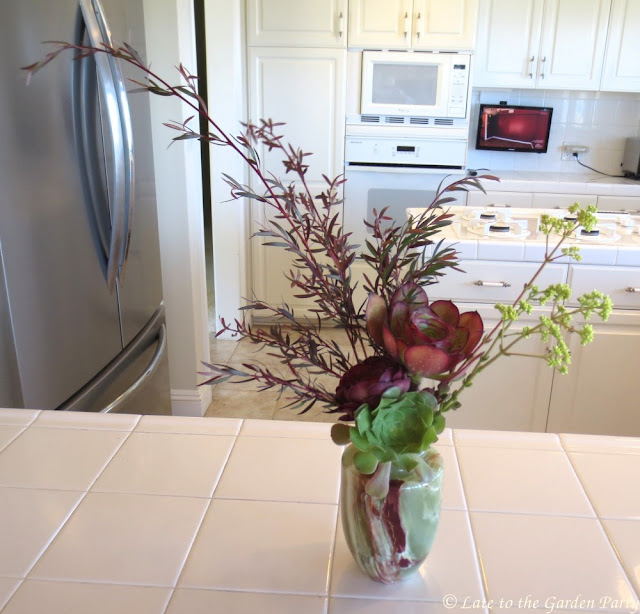 So, which creation would you submit for Loree's Aeonium Challenge?  The deadline in Monday and I'm undecided.