In a Vase on Monday: More Renga Lilies

Collecting photos for my May Bloom Day post gave me an inventory of what's currently flowering in my garden and brought some choices I might otherwise have missed to the forefront when it came time to chose flowers for "In a Vase on Monday," the meme hosted by Cathy of Rambling in the Garden.  I wasn't thinking of another vase featuring Arthropodium cirratum (aka Renga Lily) when I stepped into the garden with my clippers in hand - I was thinking about what I could do with the silvery cones of Leucadendron 'Pisa' and Melaleuca thymifolia, a plant in the back border I'd largely forgotten before my backyard photo safari.  As it turned out, the Renga Lilies made a nice companion for the other two plants.


In retrospect, I should have thinned the foliage of the English laurel to give the arrangement a more airy feel and trimmed the flowering stems of the Agonis flexuosa a bit more to make the arrangement symmetrical but, by the time I reached that determination, I was done with fussing.

But 'Pisa' wasn't the only Leucadendron I was thinking of when I stepped into the garden.  I was also wondering what I could do with the flower-like bracts of Leucadendron 'Blush'.  With the selection of a few suitable companions, I had a second vase.  (I know you're surprised.)


I was hesitant about using the Euphorbia in this arrangement because of the hassle of dealing with the sap.  In retrospect, I should have used disposable gloves when stripping the stems of their leaves as the sap dripped from every leaf juncture.  It didn't cause me any skin irritation but I had a devil of a time cleaning the sticky stuff from my hands.  I seared the entire length of the stripped stems, which limited the seepage but I did have to change the milky water in the vase when the arrangement was complete.

The first vase was too large for any place other than the dining room table. 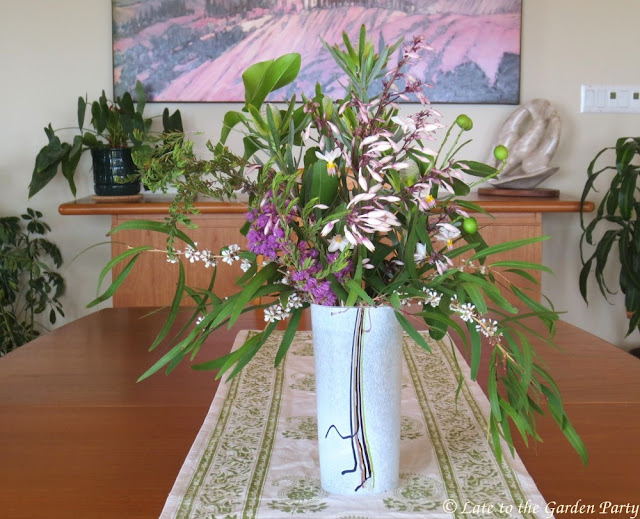 The second vase landed in the front entry. 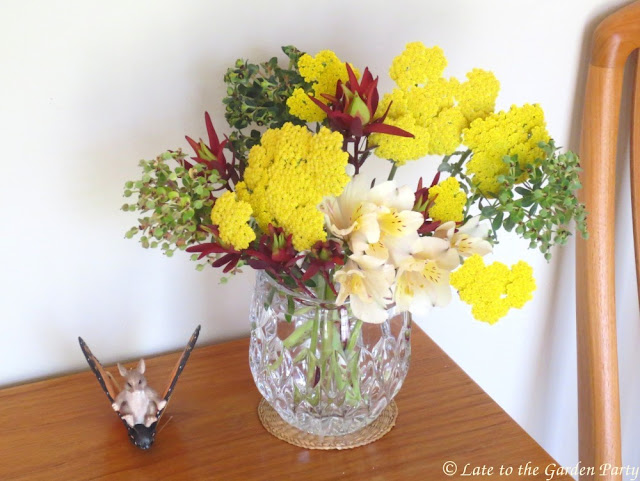 All three of last week's vases actually held up well but the two that included cilantro flowers were both heavy drinkers and litterers so I tossed them out when this week's vases were ready for placement.  The third of last week's arrangements was virtually unchanged but I tucked in a stem from one of my March purchases, Phylica pubescens, to change it up a bit.

Visit Cathy at Rambling in the Garden to discover what she and other gardeners have put together this week.