With drought conditions impacting many areas of the world, more gardeners are looking for ways to save water.  My husband and I have been water conscious for years - we installed our first drip irrigation system in the tiny garden I tended at our former home - but our consciousness was raised to a new level when we moved into our current place in December 2010.  Not only was our new property much larger and our water bill correspondingly much higher, but California entered a period of severe drought in 2012, complicating matters further.  Public notices about the drought began in 2013.  We began voluntary conservation measures in 2014 and, in 2015, mandatory water restrictions were implemented.  We'd managed to reduce our water use by about 25% in 2014 but the 36% reduction required of my community in 2015 (in relation to 2013 usage levels) was still painful.  With no end to the drought in sight, water saving remains an ongoing concern that informs most of my gardening decisions.  I'm constantly looking for ideas to up my game so I was very pleased when Pam Penick, author of the blog, Digging, and a book on lawn alternatives, Lawn Gone!, asked me if I'd like an advance copy of her newest book, The Water Saving Garden.  Of course, I said yes!

Pam's new book is a logical extension of some of the themes in her prior book, which I've had on my shelf since it was published in 2013.  Pam pointed out that lawns don't make sense in many areas of the country, like the arid US Southwest, where they require unreasonable amounts of water to be kept looking good.  While I removed the lawn in my former garden because it was tiny and I didn't want to give up the space to something as boring as sod, I began removing lawn in stages in our current garden almost immediately after moving in largely because it was a water hog.  I admit that the decision to eliminate all of our remaining lawn, a step we took this past fall, wasn't easy but seeing photos of lawn-less gardens, like those in Pam's book, her blog, and other publications, got me over the hump.

Recognizing that many people have reservations about low-water gardens based on preconceived notions about what those gardens are like, Pam starts her new book with a look at a range of water-saving gardens in different styles and different parts of the country.  She points out that reducing water use doesn't automatically dictate use of cactus and rock.  While I've become very interested in succulents in recent years and portions of my garden are allocated to such plants, I also rely heavily on a range of Mediterranean plants that are adapted to drought conditions.  Very few people who see my Grevilleas and Leucadendrons turn up their noses.  In fact, some seem to think I must be gaming the water restrictions with such beautiful specimens in my garden.


And almost everyone who strolls along our street offers positive comments on my succulent garden. 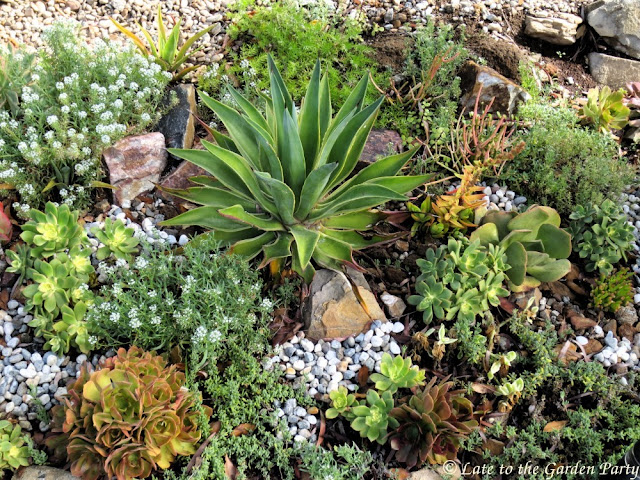 The second section of Pam's book is focused on water capture and retention.  Her suggestions include everything from permeable paving to the use of rain barrels to increasing shade cover.  We were lucky enough to inherit permeable paving with our current house.

We've added flagstone paths as we've removed our lawns but all of these have ample spacing to allow rain to seep into the soil.

As anyone who regularly reads my blog knows, I advocate rain collection.  I brought one 50-gallon rain barrel with me when we moved in but I've since added 2 more, a 160-gallon tank and a behemoth 265-gallon tank, which in total has given me 475 gallons of water collection capacity.  My collected rainwater has seen me through some difficult dry periods, while allowing us to keep our water usage well below the budget allocated by our water service provider, despite our 36% reduction target.  As Pam points out in her book, it's truly amazing how much rain one can collect off the average roof.  I was down to about 50 gallons of rainwater earlier this week but, with just over a half inch of rain on Wednesday night, I estimate I'm back up close to 350 gallons.


Pam's book also describes ways of sculpting gardens to retain rainwater using berms, microbasins, swales and terraces.  I've done a little experimenting with the first two but, had I read her book earlier, I think I would have factored these strategies into my plans in a more deliberate way.

The third section of the book is focused on planting.  Losing, or at least shrinking, lawn areas is one theme.  In addition, Pam emphasizes use of adapted natives (with appropriate admonitions to define "natives" in terms of one's own microclimates), as well as other adapted plants.  Importantly, she also emphasizes the need to time planting with the needs of the plants in mind.  In California, if not all of the Southwest, that means doing the majority of one's planting in the fall.  I got that message years ago but continue to be frustrated by the difficulty of procuring the plants I want within the right planting window.  Local nurseries and garden centers generally sell most plants when they're in bloom or about to bloom rather than when they should be planted to ensure the development of healthy root structures.  In time, I hope they'll adjust their practices and expend more effort educating their customers.  I know from experience that planting at other times here, even in early spring, can be a recipe for disappointment.

The fourth section of Pam's book addresses the creation of the illusion of water in the garden.  This is a topic I haven't seen covered much in other books dealing with drought, water-saving or summer-dry gardens.  She talks about the value of recirculating water features and the use of both plants and stone to evoke the impression of plentiful water to visually cool garden spaces.  Like all the other sections of her book, this one is accompanied by lots of beautiful photos to prompt the reader's thought processes.

The final section of Pam's new book is a selection of 101 water-saving plants.  Of the plants she listed, I have more than one third in the same genera, if not always the same species.  My beloved Grevilleas and Leucadendrons didn't make the list but I admit that they're not adapted to broad sections of the country so I'll forgive Pam that omission.

Pam's offer of the book was without obligation.  I offer this review out of my own enthusiasm for the book and the subject matter.  If you're concerned about water conservation but aren't sure how to get started, or simply want to step up your game by creating a more sustainable garden, I recommend picking up Pam's book.  It's scheduled for release on February 23rd but advance orders can be placed now.