In February, the large Eucalyptus tree that dominated our side yard was removed for reasons I detailed here.  At the time, I worried about collateral damage to the surrounding garden areas.  The area most directly impacted by the loss of the tree was the bed directly adjoining the one in which the Eucalyptus formerly stood.  Instead of nearly full shade, it now receives full sun - in fact, it became the sunniest bed in my back yard.  While the tree service people did a great job of protecting the plants in that area, the plants suffered under the full sun exposure.  Within weeks of the tree's removal, the ferns had yellowed, the Pericallis (Florist's Cineraria) was burned and stunted, and the Pseuderanthemum 'Texas Tri-star' was all but dead.  I added some sun-loving annuals like the Nemophila menziesii (Baby Blue Eyes), shown in the picture below, and, later, Layia platyglossa (Tidytips) but, as time went on, the bed looked worse and worse.  Only the pansies seemed to enjoy the change in sun exposure.


The plants in the former shade bed also didn't blend particularly well with the plants I'd selected to fill the adjoining bed formerly occupied by the Eucalyptus.  I probably should tear out all the plants in the former shade bed and start from scratch but I'm giving the largest ones, 3 Acanthus mollis and 2 Arthropodium cirratum (Renga Lilies), a reprieve to see if they can adjust.  Both varieties are said to handle full sun but it remains to be seen if that's true when the sun is accompanied by high summer-time temperatures, low humidity, and regular Santa Ana winds.  I've relocated the ferns and some of the other shade plants that weren't already dead.  This weekend, I filled some of the empty spots with new plants, including Aster novae-angliae 'Skyscraper', Briza media, Teucrium betonicum, and Verbena lilacina 'De La Mina'.  In addition, I moved a Salvia leucantha 'Waverly White' from the back border to this one.  All of these plants are reported to be drought and heat tolerant. 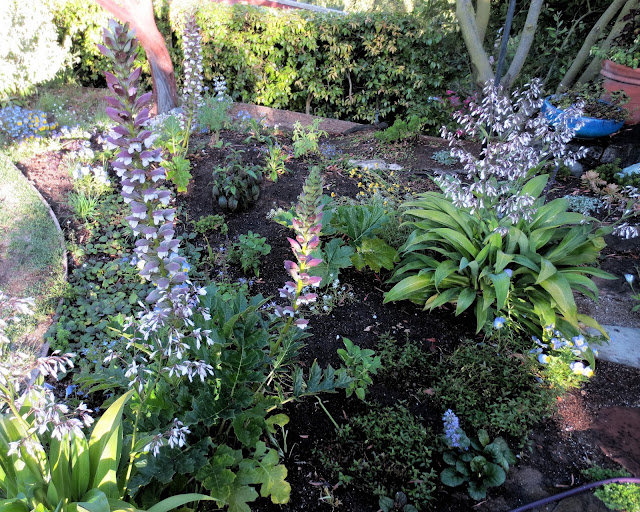 The Baby Blue Eyes I planted in February took a beating under our relentless Santa Ana winds so I pulled them out and filled in with more Ajuga repens 'Catlin's Giant' along the pathway that separates the former shade bed from the former Eucalyptus bed.  I also added Pratia pedunculata (Blue Star Creeper) between the flagstones, which is already filling in nicely.


I think the plants on the 2 sides of the path now blend together somewhat better, although I'll have to wait until some of the new plants grow up and flower before I draw any final conclusions.


The next major project is to remove some of the nearly dead "lawn" surrounding these beds.  This section of grass (weeds) wasn't in good shape to begin with as it was riddled with tree roots.  When the Eucalyptus came down, it took a thorough beating because the tree service guys used it as a staging ground when they cut up the branches and trunk of the tree.  My plan is to extend the existing flagstone path to the side patio and also through the arbor toward the path that leads to the lower section of the front garden.  I'll probably fill in around the expanded path with other low-growing groundcovers.

Instead of collateral damage, I'm trying to see all this as a new opportunity but, in any terms, it's still a lot of work.
Posted by Kris Peterson at 8:13 PM